SEOUL, Sept. 19 (Yonhap) -- South Korea is targeting to commercialize a Level 4 autonomous vehicle in 2027 to release half of newly launched vehicles as Level 4 models in 2035, the transport ministry said Monday.

This year, Korea aims to become the world's third country to commercialize a Level 3 autonomous vehicle after the United States and Japan, the Ministry of Land, Infrastructure and Transport said in a statement.

"To achieve the aim, the government will overhaul the existing transportation systems, and set up safety standards and insurance programs for autonomous cars to provide Level 4 autonomous bus services as well (by 2027)," the statement said. 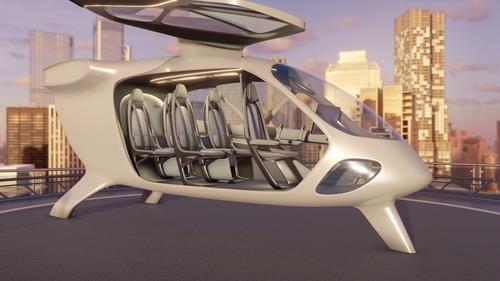 The ministry said it will initially establish the real-time telecom systems in 110,000 kilometers of roads by 2030.

The government also seeks the commercialization of urban air mobility (UAM) services in the metropolitan area in 2025.

UAM is widely considered the next big thing in urban mobility amid concerns of the worsening of traffic congestion and air pollution. Most UAM vehicles in development are being designed to run on electricity and travel at low altitudes in urban areas.

Supernal unveiled a peep into the future electrical vertical take-off and landing (eVTOL) aircraft concept, its design and technologies.

Supernal aims to commercialize the eVOTL aircraft in 2028 while collaborating with more than 50 companies, including affiliates of Hyundai Motor Group, to help ease related regulations and establish the infrastructure for UAMs.

Seoul targets half of new vehicles as autonomous ones in 2035

Seoul targets half of new vehicles as autonomous ones in 2035