SEOUL/WASHINGTON, Sept. 22 (Yonhap) -- South Korean Industry Minister Lee Chang-yang has voiced worries that the new U.S. law that gives tax benefits only to electric vehicles made in North America will have negative impacts on the overall bilateral ties and urged a swift solution, his office said Thursday.

Lee made the comments during a meeting with U.S. Secretary of Commerce Gina Raimondo held in Washington on Wednesday, according to the Ministry of Trade, Industry and Energy.

The Inflation Reduction Act (IRA), signed by U.S. President Joe Biden in August, gives up to US$7,500 in tax credits to buyers of EVs assembled only in North America, sparking concerns that Hyundai Motor Co. and Kia Corp., the two major automakers based in South Korea, will lose ground in the U.S. market, as they make EVs at domestic plants for export to the U.S.

"Discriminatory measures, such as the IRA, would hurt the momentum for cooperation at a time when there are many issues for the two nations to work together, including semiconductors, batteries and nuclear power generation. Its swift solution will do good to the both sides," Lee said in a press release.

He stressed that South Korea has been actively participating in various U.S.-led global coordination channels on supply chains, including the Indo-Pacific Economic Framework (IPEF), and the IRA runs against such a trend.

The U.S. secretary shared the concerns and vowed to continue candid consultations to seek solutions, according to his office.

The Seoul government has sought to reflect its requirement to related guidelines, as it seems not possible to amend the law before the U.S. mid-term election in November. 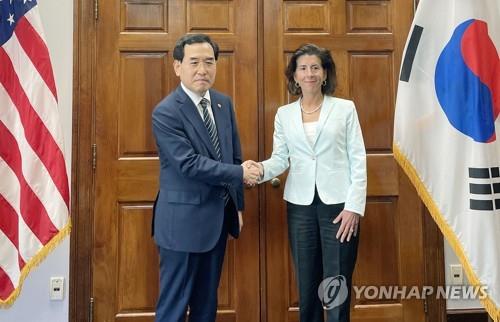 The U.S. Department of Commerce said Raimondo discussed Seoul's concerns over the IRA but that she also relayed Washington's own concerns over South Korea's pending legislation that seeks to impose network usage fees on foreign content providers, such as Youtube.

Raimondo also stressed the importance of the economic relationship between the two countries.

"Continuing the momentum from their May meeting in Seoul and their establishment of the U.S.-South Korea Supply Chain and Commercial Dialogue (SCCD), the secretary and the minister agreed to launch by the end of the year new SCCD working groups on advanced manufacturing supply chain resilience and dual-use export controls," it said.

The IPEF is a U.S.-led economic initiative launched in May. In the inaugural ministerial meeting, held in Los Angeles earlier this month, South Korea and 13 other member nations agreed to launch formal rule-setting talks on four pillars of the framework -- fair trade, supply chain resilience, infrastructure and green technology, and tax and anti-corruption.