Costa Rica, world No. 34, will face the 28th-ranked South Korea at 8 p.m. Friday at Goyang Stadium in Goyang, just northwest of Seoul.

Both countries are bound for the World Cup in Qatar in November, and Costa Rica will play Germany, Spain and Japan in Group E. 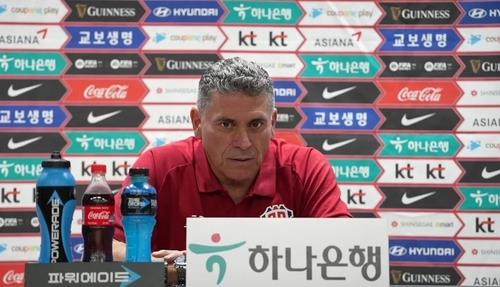 In an online interview, Suarez said South Korea, boasting several talented players based in Europe, will present a good test for his side.

"I've been quite impressed with Korean players and by facing them, we will get to find out how we stack up and take the next step in our development at the same time," Suarez said through an interpreter. "We have had a fantastic year so far and successfully qualified for the World Cup. We are trying to grow into a great team, and this match is an extremely important part of the process."

To that end, Suarez called up a few international rookies and several others with fewer than 10 caps, while leaving out veterans like goalkeeper Keylor Navas and midfielder Yeltsin Tejeda.

The coach said some of the veterans have little left to prove and he wanted to give some new faces a look before finalizing his World Cup roster.

"Our young guys should provide some fresh energy for the rest of the team," Suarez said. "We've always been a veteran team, and I think older guys and younger players should be able to create some positive synergy."

Suarez rejected the notion that playing South Korea will help Costa Rica prepare for their World Cup match against Japan just because the two opponents are located in the same continent.

"Football is completely different (in those two countries), and their tactics and other aspects of the game are clearly not the same," Suarez said. "It would be disrespectful for South Korea to call them similar to Japan. We just have to focus on our own performance and our own preparation against Germany, Spain and Japan. We aren't going to play South Korea just to be ready against those great teams at the World Cup."

While Suarez said South Korea captain Son Heung-min is a great player, Costa Rica should be more concerned about defending South Korea as a team, instead of worrying about individual players.

"When I previously coached Ecuador and Honduras, I always felt South Korea were a great team," Suarez said. "Rather than discussing individual players, I want to focus on how well organized we should be as a team."