SEOUL, Sept. 23 (Yonhap) -- Only one of four South Korean golfers grabbed a point for the International Team on the first day of the Presidents Cup, as the United States jumped out to an early lead at the match play competition on home soil.

Kim Si-woo teamed up with Cam Davis of Australia to defeat world No. 1 Scottie Scheffler and Sam Burns 2-up in their foursome match at Quail Hollow Club in Charlotte, North Carolina, on Thursday (local time).

Kim is one of a record contingent of four South Koreans at the biennial event, which pits non-European international players against Americans. Kim is playing at his second Presidents Cup. 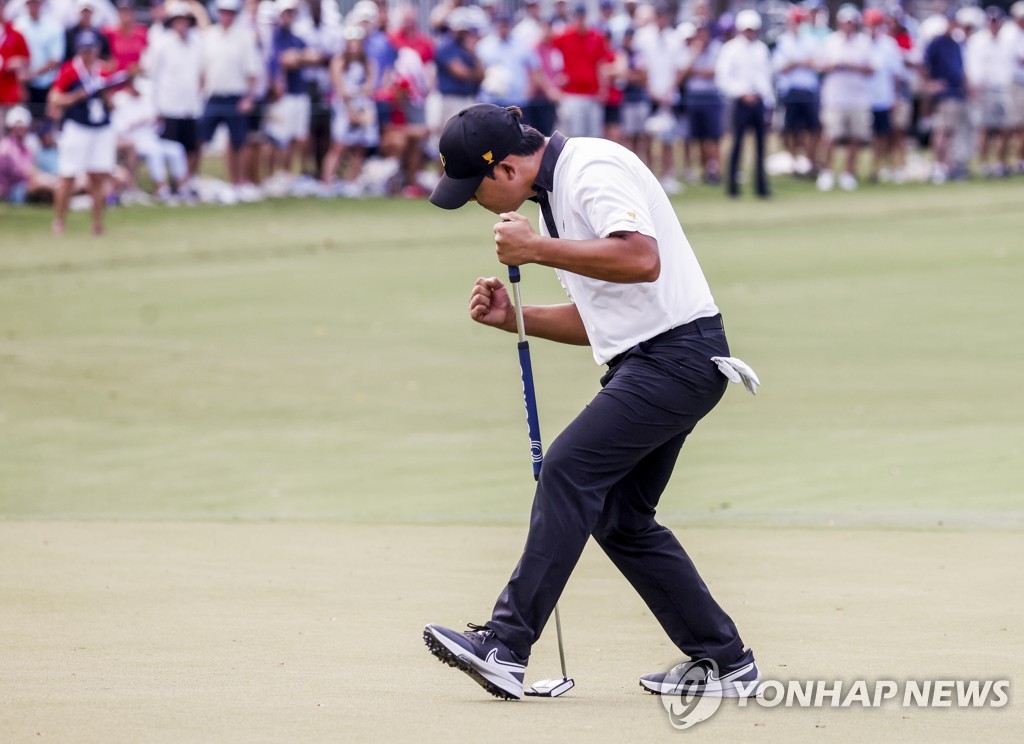 Another two-time President Cup contestant from South Korea, Im Sung-jae, played with Corey Conners of Canada, but they lost to Jordan Spieth and Justin Thomas 2 & 1.

The point by the Kim-Davis tandem, fuelled by a late charge, was the only one for the International Team on Day 1, with the U.S. winning the other two matches to build a commanding 4-1 lead.

At his postmatch press conference, Kim said he and Davis went off to "a brutal start" while battling nerves, and it took them a few holes to settle down.

"When our names were announced on the first tee, my legs were shaking," Kim said. "I was getting (angry) because I was losing and that made nerves go away."

As nervous as he may have been, Kim said he was not daunted by facing Scheffler, the world's top-ranked player and the reigning PGA Tour Player of the Year.

"It's hard to beat No. 1, but you never know in match play, especially in this format," Kim said. "We tried to stay positive and not think about the No. 1 ranking. That worked."

In foursomes, partners each take a turn to hit shots for their team. On Friday, teams will play fourball matches, where each player hits their own ball and the better score of the two becomes that pair's score.

Each match victory is worth a point, and a tie is worth a half point. 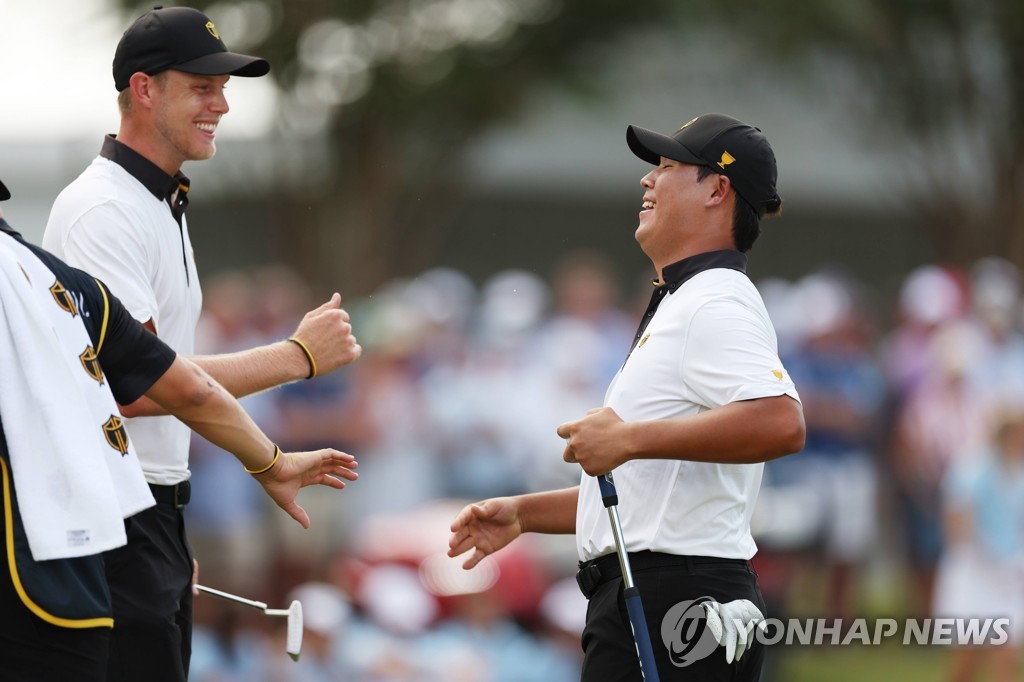 This is the 14th edition of the Presidents Cup, which began in 1994. The U.S. has won 11 of them, while taking just one loss and settling for a tie in the other. The Americans are heavily favored to extend their current winning streak to nine competitions.

Kim and Davis lost the opening hole in their match but responded right away by winning the second hole with a par. Scheffler and Burns took the third hole with a birdie, and consecutive birdies at sixth and seventh holes gave them a 3-up lead. 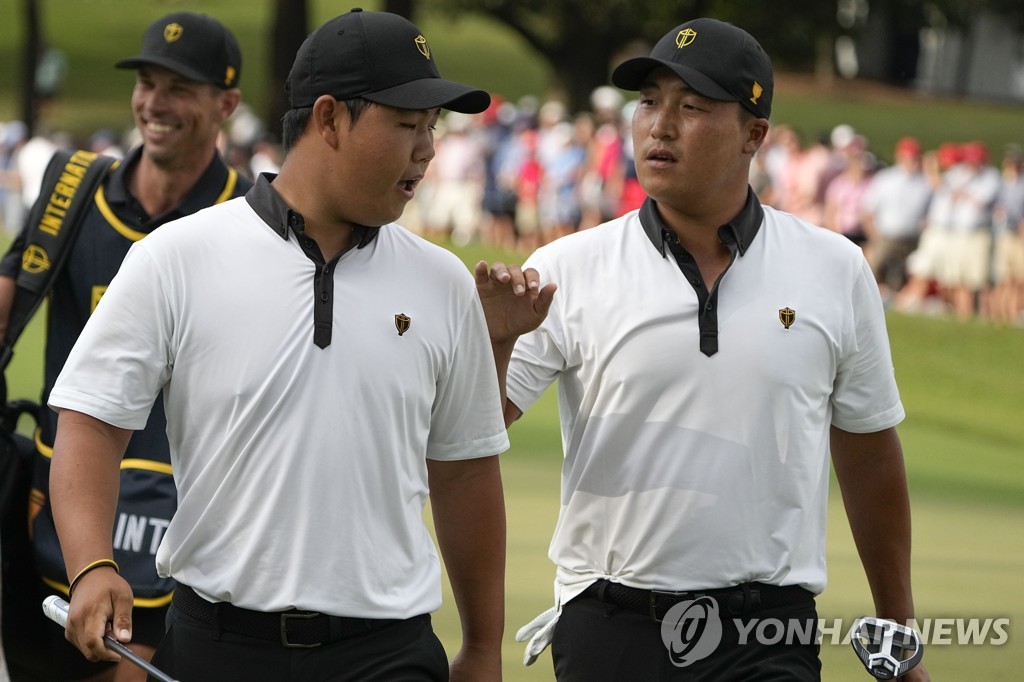 Davis then sank a birdie putt on the eighth hole to cut that lead to 2-up. A birdie at the par-five 12th shaved that deficit in half, though Scheffler's birdie at the 13th restored a 2-up lead for the Americans with five holes to play.

Then Kim and Davis caught fire, as they won the final four holes to secure a crucial victory. The duo only needed a par to win the 15th hole, where the Americans had a double bogey, and a birdie at the 16th by Kim leveled the score.

"I was pretty close to the hole in the last three, four holes (before the 16th). I was so frustrated," Kim said. "I tried to stay positive and the 16th hole was the perfect time to make that putt."

Another birdie at the 17th put the International side 1-up, and they closed things out with a par at the 18th, while the Scheffler-Burns duo had a bogey.

Kim said he and Davis make a great pairing because their games complement each other's.

"Cam hits it far and the course is kind of long for me," said Kim, who averaged 301.1 yards off the tee last season to rank 92nd on the PGA Tour, while Davis tied for 35th at 308.5 yards in average driving distance. "Cam has great iron shots. I have great confidence in my short game and putting. It makes for a great combination."

Kim will sit out Friday's fourball sessions, though, while Davis gets to play with his countryman Adam Scott.

Among South Koreans, Im will play with Sebastian Munoz of Colombia against Scheffler and Burns. Kim Joo-hyung will be paired with Hideki Matsuyama of Japan against Patrick Cantlay and Xander Schauffele. 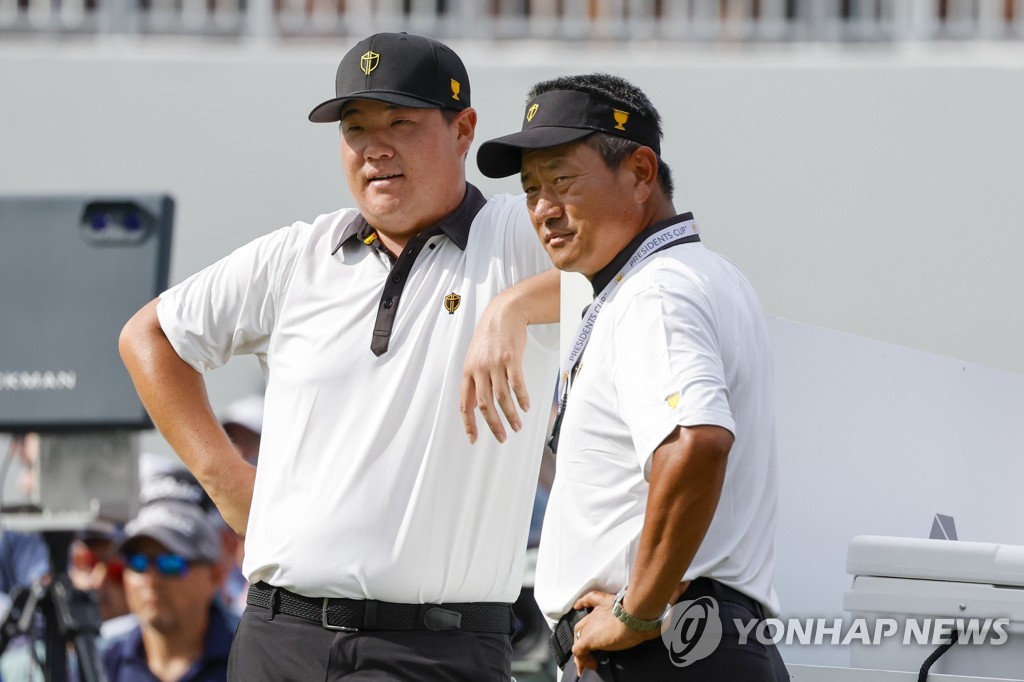