SEOUL, Sept. 23 (Yonhap) -- Prime Minister Han Duck-soo met with the ambassadors from 13 countries in the Asia-Pacific region Friday and asked for their support for South Korea's bid to bring the 2030 World Expo to the southeastern port city of Busan, Han's office said.

"South Korean people and the political and business circles are working hard in unison to host the 2030 World Expo," Han said during a luncheon meeting with ambassadors, asking them to promote Seoul's expo campaign at home.

The attendees included the ambassadors from New Zealand, Malaysia, Mongolia and 10 other countries.

Han also emphasized the importance of cooperation in the Asia-Pacific region on various issues, including the economy, diplomacy, climate change and technology innovation.

"Based on universal values, the South Korean government will play a role to become one of the leading nations across the globe and contribute to the international community's peace and prosperity," Han said. 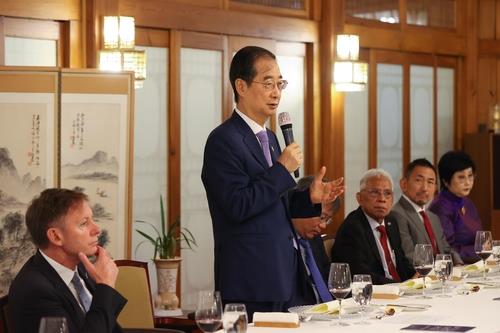