JINDO, South Korea, Sept. 24 (Yonhap) -- Former Japanese Prime Minister Yukio Hatoyama on Saturday apologized for his country's wartime brutalities against Koreans as he attended a memorial event for those killed in a 16th century historic naval battle between the two countries.

The center-left Japanese leader from 2009-2010 delivered a speech at a memorial ceremony on the island of Jindo, 349 kilometers south of Seoul, for Japanese sailors who died in the 1597 Battle of Myeongnyang.

"In the past, Japan caused deep suffering to the (Korean) people," Hatoyama said in the event held on Mount Waedeok in Jindo, South Jeolla Province.

"I am not sure if your anguished heart can be healed from this apology. … We (as Japanese) are obliged to keep apologizing -- until the people with wounded hearts feel they no longer need the apology from us," Hatoyama said. 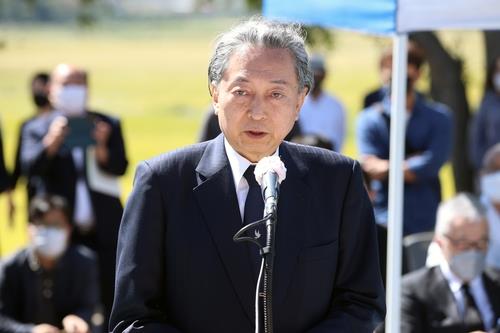 Some 100 people from the two countries attended the event that was co-hosted by the Jindo Cultural Center and a Kyoto-based peace organization.

Adm. Yi Sun-sin of Korea and his 12-ship fleet triumphed against Japan in the battle near the island during Japan's invasion in 1592-1598.

The residents buried the remains of some 100 deceased Japanese soldiers on the sunny side of a nearby mountain. The mountain was named Waedeok, meaning "extending virtue to the Japanese."

"The Japanese should not forget that (the Koreans) warmly treated them as humans whether they were enemies or allies," he said.

"Our future will brighten up when everyone from Korea and Japan cherish the historical facts on Mount Waedeok."