SEOUL, Sept. 25 (Yonhap) -- South Korean rookie Kim Joo-hyung helped lead a late push by the International Team on the penultimate day of the Presidents Cup, putting pressure on the United States as the match play golf competition heads into the final stretch.

Kim, the youngest player in the event at 20, teamed up with countryman Kim Si-woo to defeat Patrick Cantlay and Xander Schauffele 1-up in their afternoon fourball match at Quail Hollow Club in Charlotte, North Carolina, on Saturday (local time). 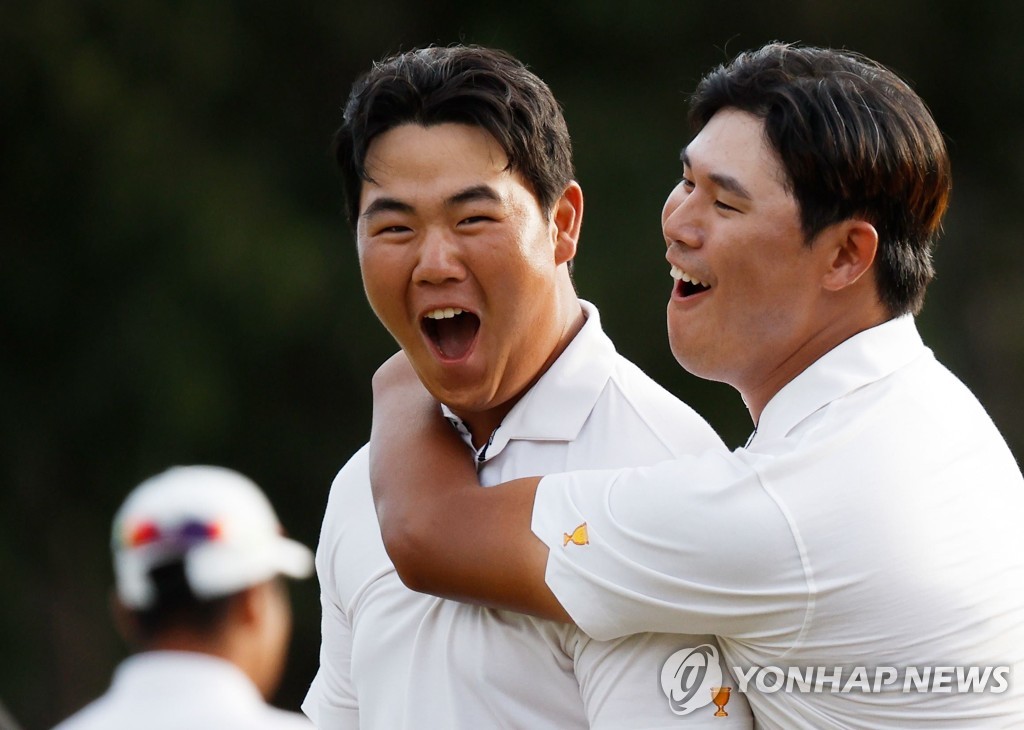 It was one of three victories by the International Team out of four fourball matches. One other South Korean, Im Sung-jae, and his Colombian partner Sebastian Munoz beat Tony Finau and Kevin Kisner 3 & 2.

The fourth member of the Korean contingent, Lee Kyoung-hoon, sat out the afternoon session, after he and Kim Joo-hyung beat Scottie Scheffler and Sam Burns 2 & 1 in their morning foursome match.

The U.S. still leads 11-7 entering Sunday's 12 singles matches, with the dozen players per side going head to head against each other in mano-a-mano fashion.

The United States just needs 4.5 more points to clinch the victory. Each match victory is worth a point and a tie is good for a half point for both sides.

The Presidents Cup is a match play event between the Americans and a team of non-European international players. Lee, Im, Kim Joo-hyung and Kim Si-woo represent the largest South Korean contingent at a Presidents Cup. 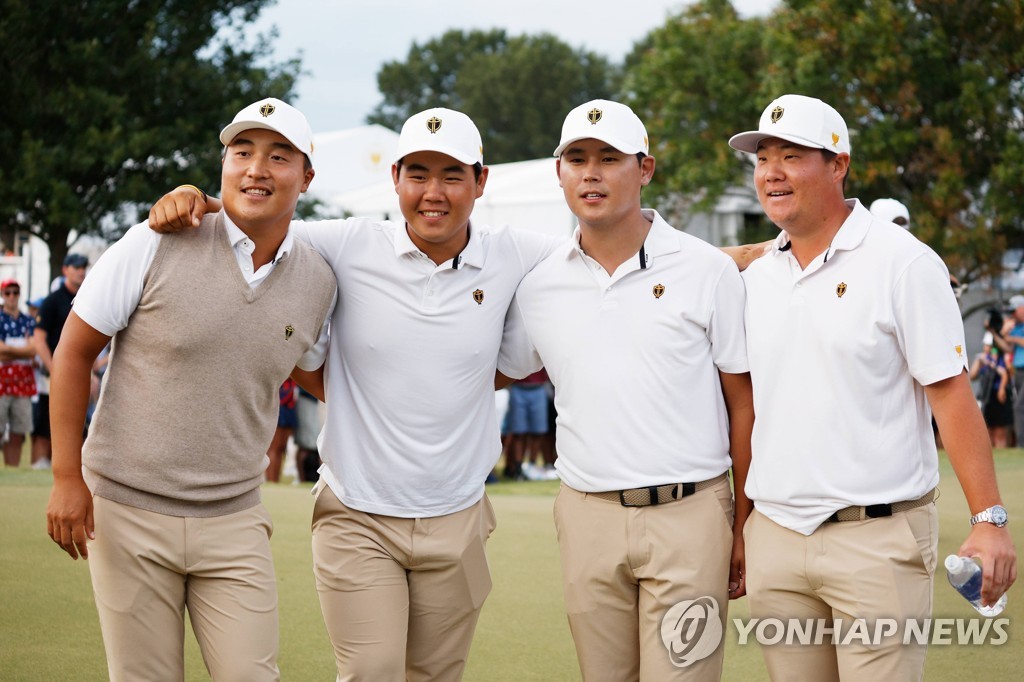 Im and Kim Si-woo are second-time participants, while Lee and Kim Joo-hyung are Presidents Cup rookies.

In foursome matches, players in each tandem take turns hitting shots. In the fourball format, players hit their own balls, and the better score of the two in a pair becomes that team's score on each hole.

Kim Joo-hyung, who goes by his English name Tom on the PGA Tour, provided some much-needed spark in the afternoon, after the Internationals split the foursome matches in the morning and found themselves behind 10-4.

He drained a 55-foot eagle putt on the par-four 11th to cut the Americans' lead to 1-up, with Kim Si-woo's own birdie putt at the 13th leveling the match. 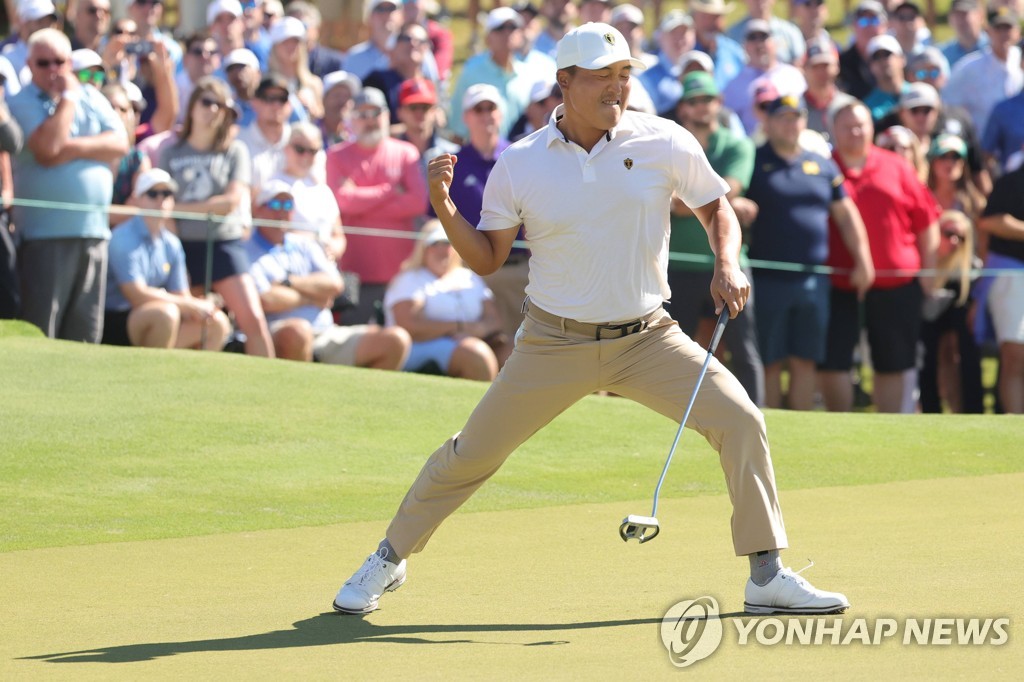 Schauffele made a birdie at the 15th to restore the U.S. lead, but Kim Si-woo responded with a birdie on the very next hole.

Kim Joo-hyung then capped off the International rally by making a 10-foot birdie putt for the win at the 18th, while also handing the Cantlay-Schauffele duo their first loss at Quail Hollow.

In the morning foursomes, Im and his Canadian partner Corey Conners lost to Jordan Spieth and Justin Thomas 4 & 3. Kim Si-woo and Australian Cam Davis, the only International pair to win a foursome match Thursday, fell to Tony Finau and Max Homa by 4 & 3 on Saturday. 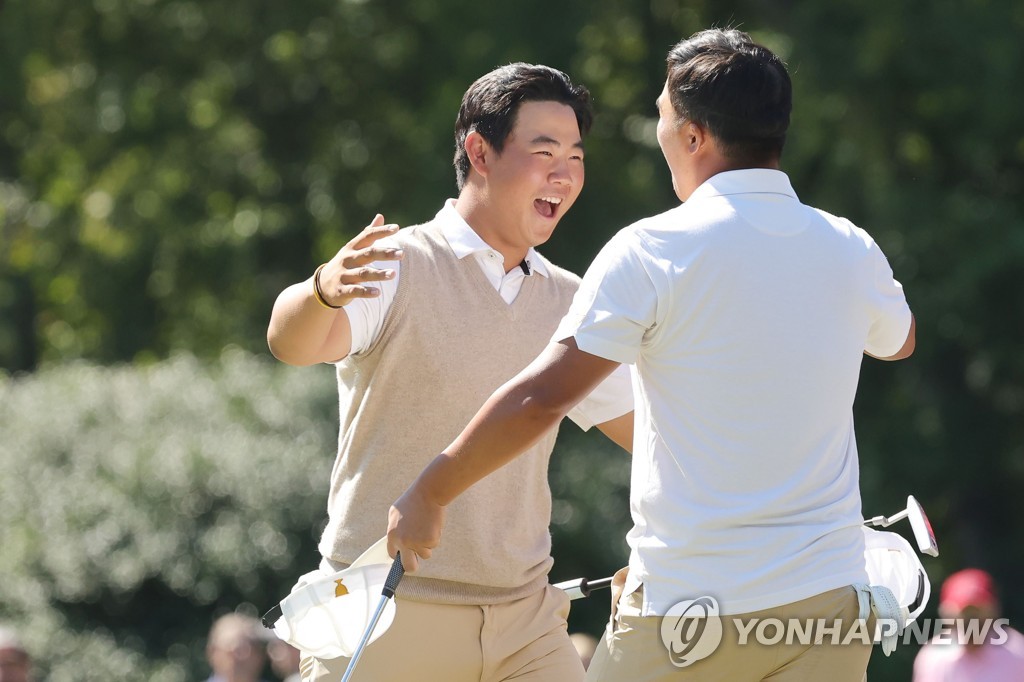 Through Saturday, Kim Joo-hyung and Kim Si-woo each had two wins for two points, while Im had 1.5 points and Lee had one point.

This is the 14th edition of the Presidents Cup, which began in 1994. The United States has won 11 of them so far, with one tie and one loss. The Americans are trying to win their ninth straight Presidents Cup.

For the singles, Kim Si-woo will lead off for the Internationals against Justin Thomas.

Im will face Cameron Young, while Lee will take on Billy Horschel, and Kim Joo-hyung will be up against Max Homa.