SEOUL, Sept. 26 (Yonhap) -- Seoul stocks dropped to the lowest level in over two years and the Korean won also continued to tumble Monday amid growing fears of a global economic recession caused by combative monetary tightening in major economies.

Trading volume was moderate at 611.4 million shares worth 9.18 trillion won (US$6.4 billion), with decliners far outnumbering gainers 891 to 34.

Foreign investors bought a net 280 billion won worth of shares, while institutional individual investors sold off a net 251.5 billion won.

The local stock market opened sharply lower tracking a decline on Wall Street on Friday, as investors fled for safety and cashing out of the stock market on fears that aggressive rate hikes by the Federal Reserve and other central banks could seriously hurt the global economy.

Last week, the Fed raised its benchmark interest rates by three-quarters of a point, its third increase in a row to bring down inflation. 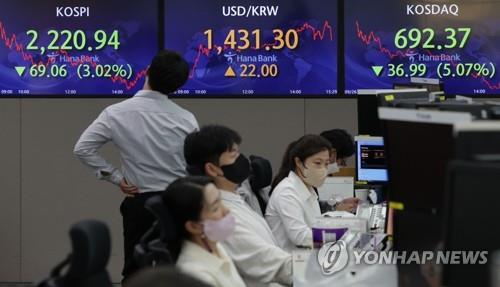 "As there is a high possibility of the Fed raising its policy rate until the first quarter of next year, the world economy is feared to fall into a recession," Lee Kyung-min, an analyst at Daishin Securities, said.

"I think the KOSPI could fall as low as the 2,050 level, considering revised forecasts for corporate earnings amid the economy's possible hard landing."

In Seoul, large-cap shares closed down across the board.

Daewoo Shipbuilding & Marine Engineering spiked 13.4 percent to close at 24,950 won on reports that Hanwha Group is seeking to take over the country's No. 2 shipbuilder in a deal valued at some 2 trillion won.

The local currency ended at 1,431.30 won against the U.S. dollar, sharply down 22 won from the previous session's close and a level unseen in over 13 years. The won has depreciated around 17 percent per dollar so far this year.

Bond prices, which move inversely to yields, closed lower. The yield on three-year Treasurys rose 34.9 basis points to 4.548 percent and the return on the benchmark five-year government bonds gained 37 basis points to 4.563 percent.