SEOUL, Sept. 26 (Yonhap) -- The southern port city of Busan will be decked up in purple lights, the signature color of K-pop supergroup BTS, before and after its one-day concert there next month, organizers said Monday.

Hybe, the entertainment company behind BTS, said on Weverse that it will host "The City" project to celebrate the band's "Yet To Come in Busan," a free concert set for Oct. 15 at Asiad Main Stadium to support the city's bid to host World Expo 2030. Weverse is a K-pop fan community platform run by the company.

"The City" project is for offering various entertainment events related to the K-pop act in a city where its concert is held before and after the show. Hybe first held the project during the group's Las Vegas concerts in April, hosting numerous events throughout the U.S. city.

"The City in Busan" will begin with an exhibition for looking back on the septet's nine-year history at Haeundae LCT, a seaside skyscraper complex in Busan, on Oct. 5.

Lotte World Adventure Busan, an amusement park in the city, will be lit up in purple and play laser and fireworks shows with the band's music from Oct. 14 to 31. There will be outdoor after-parties on the nights of Oct. 15 and 16. 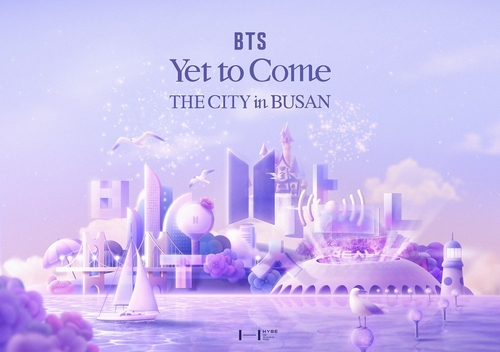