The Seoul Central District Prosecutors Office said it indicted Yoo Dong-gyu, former acting president of Seongnam Development Corp., accountant Jeong Young-hak and lawyer Nam Wook on charges of sharing internal secrets related to the Wirye urban development project, straddling southeastern Seoul and nearby Seongnam and Hanam, in July 2013, to get a private asset management firm selected as a private partner for part of the project.

The suspects are also accused of using the same method to get Hoban Construction chosen as the builder, and then using the resulting profits, worth 41.8 billion won (US$29.2 million), to pay dividends of 16.9 billion won and 4.23 billion won, respectively, to Hoban and the private asset management firm.

Yoo, Jeong and Nam are all standing trial in connection with the Daejang-dong development project, which was conducted in 2015 when main opposition Democratic Party leader Lee was mayor of Seongnam.

Daejang-dong is a district in Seongnam, just south of Seoul. 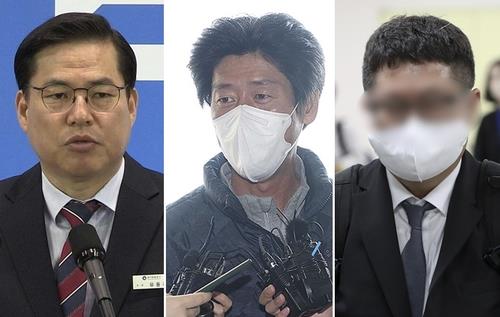