SEOUL, Sept. 29 (Yonhap) -- Airbnb Inc. could add Korean traditional houses known as "hanok" as an independent booking option on its home rental platform, an executive has said, amid the growing popularity of the Korean wave of pop culture among international travelers.

In May, Airbnb made major upgrades to its platform, including a reorganization of its homepage and app search function around what it calls "Airbnb Categories," which sorts homes by style -- such as beach, mountain and tree house -- instead of location or dates.

Japanese traditional inns known as ryokan and distinguished for their unique interior and proximity to hot springs were added on Airbnb's categories list in the May update.

Catherine Powell, Airbnb's global head of hosting, said that Korean traditional houses, hanok, could be popular if offered as an independent lodging option on Airbnb, as the Asian country becomes a favored travel destination amid a rise in interest in Korean traditional and pop culture.

"We know that the Hanoks that we have on the platform are very popular. We can't confirm yet, but would love it to be a category like how we did with ryokan," Powell said last week in an interview with Yonhap News Agency during her first visit to Seoul since joining the company in 2020.

South Korea served as a "bright light" for Airbnb when Asia operations were challenging during COVID-19, she said.

Following such a trend, Airbnb plans to extend its previous efforts with South Korean provincial governments and the Korea Tourism Organization to promote hanok stays.

This is also Airbnb's commitment to sustainability, she said, noting global interest in Korean culture can generate real tourism dollars, especially in rural areas, which need them the most.

K-pop and the broader Korean Wave have resonated with young people around the world, burnishing South Korea's image as a cool country home to K-pop phenomenon BTS and "Squid Game," a South Korean phenomenon survival drama that became the first non-English TV series to win best actor and director in a drama series at the 74th annual Primetime Emmy Awards. 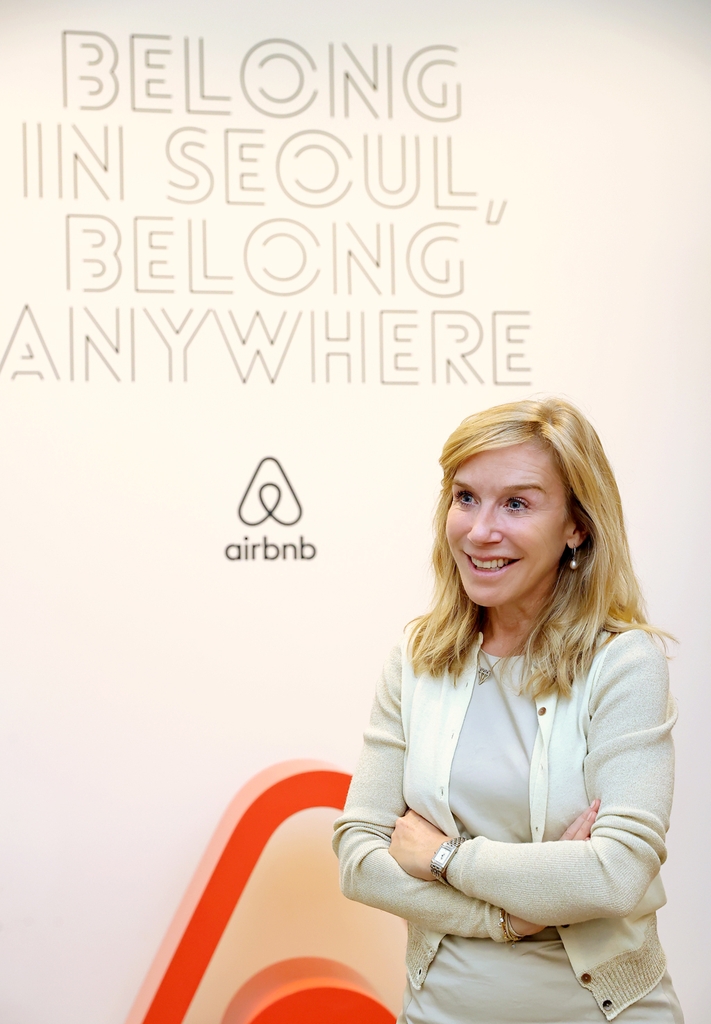 Powell said Airbnb will continue to make efforts to promote Korean popular culture, adding Airbnb will offer more unique destinations related to the broader Korean pop culture following its "BTS in the SOOP" mansion that opened for bookings in August. The house was featured in the reality show starring K-pop boy band BTS.

When asked what Airbnb's future business goals in Korea will be, Powell said the company will focus on promoting "the economic empowerment opportunity of hosting," as it has seen an upward trend of new hosts in Korea signing up on Airbnb since the pandemic.

"Between last year and this year we had seen a 40 percent increase in new hosts (in Korea). And I think that number will grow this year with the cost of living and inflation. So we want them to be aware of hosting as an economic opportunity," she said.

On her thoughts on travel trends after the pandemic, Powell said "flexibility" will remain an important factor even after reopenings, as the pandemic-led remote working culture has permanently changed people's perception on where and when they can travel.

"I think the degree to which people remain flexible is going to depend on how the return to office work stabilizes. But people will add on time to their weekends, or they can add a week to a holiday and work remotely for a week. So the flexibility is going to be there," Powell said.

"I'm excited because there is so much opportunity here in South Korea. They talk about the K-wave, and you can see how engaged people are with the culture. So we will continue to do more with pop culture and with traditional culture."