SEOUL, Sept. 29 (Yonhap) -- South Korea's homegrown KF-21 fighter jet is expected to achieve supersonic speeds during a flight test in the first quarter of next year, the state arms procurement agency chief has said, in what would be a key milestone in the country's weapon system acquisitions.

Eom Dong-hwan, minister of the Defense Acquisition Program Administration (DAPA), made the remarks during an exclusive interview with Yonhap News Agency, as the fighter's prototype has been undergoing flight tests since July to complete the development process by 2026.

"I think (the KF-21) is expected to reach supersonic speeds around the first quarter of next year," Eom said during the recent interview at his office in Gwacheon, just south of Seoul, ahead of the 100th day since his inauguration on June 23. 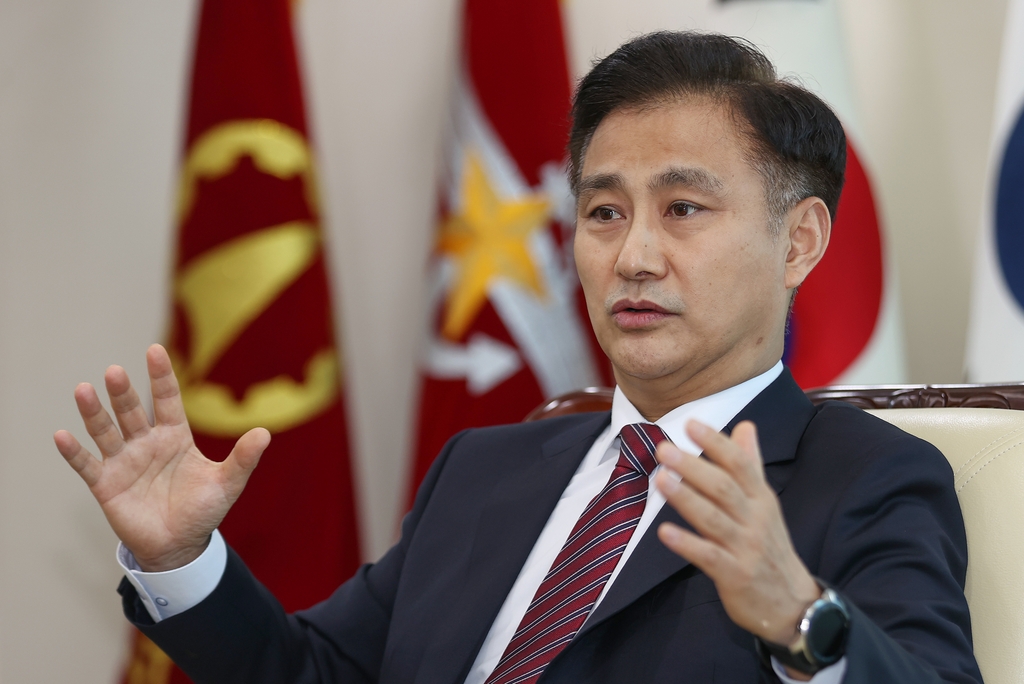 Securing the supersonic capability is a major part of the development efforts, led by its manufacturer, Korea Aerospace Industries Ltd. (KAI), as it means all functions, including weapons systems and avionics, work smoothly irrespective of flight speeds.

Currently, the fighter makes up to three sorties each day under a rigorous testing process, though heavy precipitation this summer has led to a reduction in the planned flight tests, the minister said.

"Despite the reduction, we can surely overcome that if you look at the overall development process," he said.

Launched in 2015, the KF-21 project worth 8.8 trillion won (US$6.15 billion) seeks to develop the 4.5th-generation fighter to replace the country's aging fleet of F-4 and F-5 jets waiting to be decommissioned following decades of service.

Indonesia as a partner country has agreed to shoulder 20 percent of the development cost and make in-kind payments for 30 percent of its share. Despite the deal, the country has not made payments since the latter half of 2017.

Eom voiced hope that Indonesia may resume its payments late this year.

"We believe that by the end of this year, Indonesia may resume its payments little by little," he said.

The minister called attention to the Seoul summit between President Yoon Suk-yeol and his Indonesian counterpart, Joko Widodo, in July, where they reaffirmed their commitment to closely cooperate until the completion of the fighter project.

"Indonesia has not clearly explained yet when it would make the overdue payments, but the overall atmosphere is very positive," he said. "Though they may not make the payments all at once, we expect them to proceed gradually."

On the issue of Indonesia's in-kind payments, Eom said Jakarta has yet to specify what item it would choose to cover its share of the development cost. Speculation has lingered that the country could provide its major export item, palm oil.

"That agreement (on in-kind payments) still remains valid. But due to disruptions to supply chains in the wake of the Ukraine crisis, prices of raw materials and oil have risen," he said. "So, (in-kind payment) could be rather burdensome for Indonesia. We are closely watching developments."

Asked about his policy priorities, the minister outlined his vision to incorporate artificial intelligence, unmanned and autonomous technologies into weapons systems, like the K9 self-propelled howitzers.

The minister has been envisioning employing new technologies not just for ground weapons systems but also for maritime and air assets, he said.

Eom said that such arms export contracts have proceeded in careful consideration of various factors, including diplomatic relations.

"The defense ministry, as well as the foreign ministry and the National Intelligence Service, had sufficient consultations given that arms exports could lead to international conflicts and problems if they are exported to countries that do not share values like freedom and market economy."