SEOUL, Sept. 28 (Yonhap) -- Opposition leader Lee Jae-myung said Wednesday that his party will hold the Yoon Suk-yeol government responsible for what he calls a "diplomatic disaster" during the president's recent overseas trip.

In a speech at the National Assembly, the chairman of the main opposition Democratic Party (DP) said Yoon's trip to Britain and the United States last week revealed the level of diplomacy of his government. 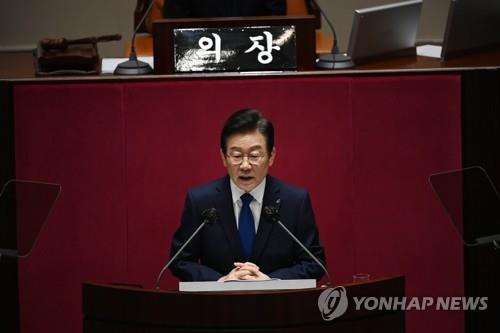 Lee and the DP have portrayed Yoon's trip to Britain, New York and Canada as a diplomatic fiasco fraught with gaffes and blunders, including his failure to pay respect to the coffin of Queen Elizabeth II before the state funeral and the lack of a tangible outcome from a summit with Japan. It has also condemned Yoon's use of foul language caught on a hot mic during a trip to New York.

"The DP, as the majority party, will clearly find out who is responsible for the diplomatic disaster," Lee said, vowing to respond strongly to any damage to the national interest and national status.

"There can be no rehearsal in diplomacy likened to a war without gunfire. An excuse of being a beginner cannot be accepted in the harsh diplomatic war," the chairman said in his first parliamentary speech after being elected the DP leader last month.

Lee also denounced Yoon for failing to discuss urgent pending issues with the U.S., such as impact from the Inflation Reduction Act and bilateral currency swap, during his New York trip.

Lee then proposed a Constitutional revision to change the nation's presidential system from the current five-year single term to a four-year, two-term presidency.

On North Korea, the DP leader said that it is a shocking and serious problem if the North intends to use its nuclear weapons not only for defense but also for a preemptive strike.

"As a realistic alternative, we propose conditional sanctions relief (for the North) and step-by-step simultaneous actions. We don't support any unilateral policy only for North Korea," Lee said, promising to resolutely demand changes in the North's wrong practices and attitudes.