The three countries are set to stage the training Friday, as Pyongyang has been pushing to develop submarine-launched ballistic missiles (SLBMs) while codifying an assertive nuclear policy that leaves open the possibility of preemptive strikes in a contingency.

"The training is part of the defense ministry's steps to restore military cooperation among South Korea, the U.S. and Japan to a level before 2017, so as to respond to North Korea's nuclear and missile threats," the ministry said in a statement sent to reporters.

The training focuses on detecting, identifying and tracking North Korean submarines equipped with capabilities to launch SLBMs, according to the ministry.

"We have chosen the international waters of the East Sea as the training area in consideration of North Korea's SLBM threats and key areas of submarine activities," the ministry said.

In a separate release, the U.S. military said that three-way operations "concretely demonstrate our shared, unwavering commitment to upholding regional security and stability."

"Exercises, such as this, forge a trilateral relationship between Japan, Republic of Korea and the United States that is forward-leaning, reflective of our shared values, and resolute against those who challenge regional stability," reads a statement posted on the U.S. 7th Fleet's website.

It added, "This exercise will promote interoperability, tactical and technical coordination, and efficient communications between the three countries."

Meanwhile, Seoul's defense ministry said it is "very regrettable" that the plan for the training, which requires a "considerable level of security," had been leaked in advance of an announcement through a private social media account, in a reference to the disclosure by Rep. Ahn Gyu-back of the main opposition Democratic Party.

The previous day, Ahn wrote on his Facebook account that the drills are set to take place just around 150 kilometers away from South Korea's easternmost islets of Dokdo, over which Japan has persistently claimed sovereignty. 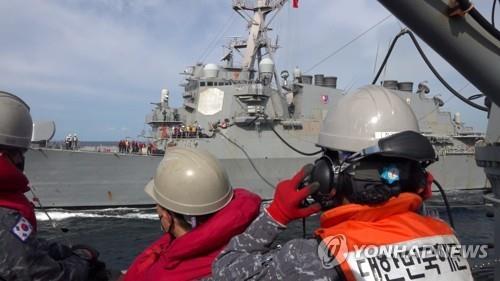