SEOUL, Sept. 29 (Yonhap) -- South Korea's Kwon Soon-woo was knocked out of the second round at the lone ATP tournament on home soil on Thursday, losing to Jenson Brooksby of the United States in straight sets.

The eight-seed Brooksby finished off Kwon 6-3, 6-4, to reach the quarterfinals of the Eugene Korea Open at Olympic Park Tennis Center in Seoul.

Kwon, the highest-ranked South Korean player at No. 121, has not gone past the second round at any ATP event since winning his maiden title in Kazakhstan last September.

With Brooksby serving to open the match, Kwon battled the 46th-ranked American shot for shot, as the two went to deuce six times. Brooksby grabbed the game after Kwon's backhand return went wide, and the grueling early victory set the tone for the rest of the match. 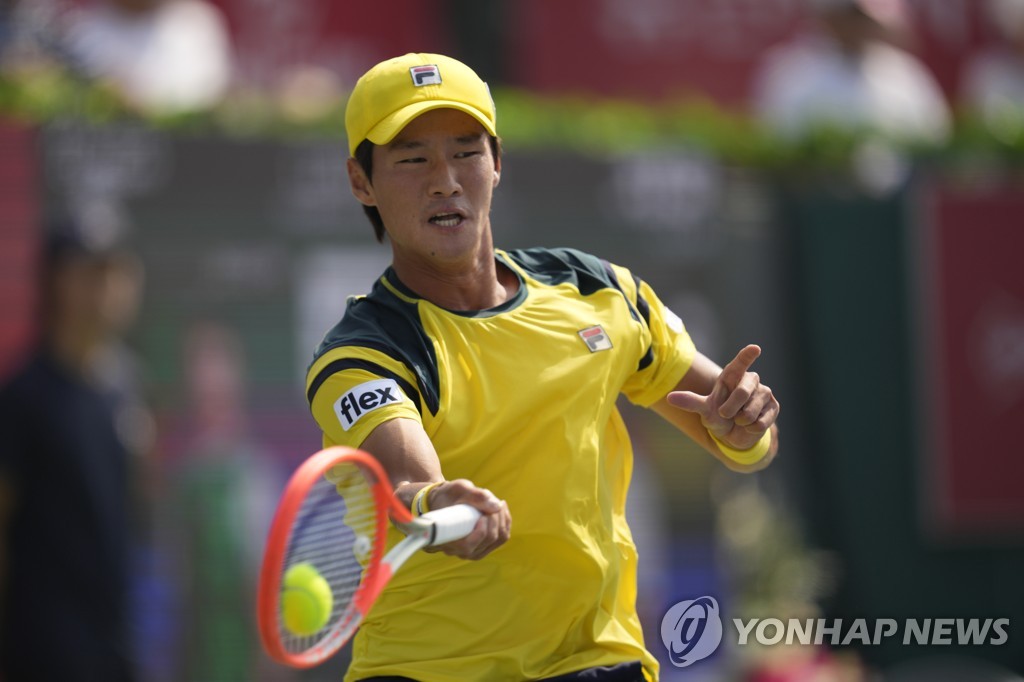 Brooksby got his first break for a 3-1 lead and rode his dominant serves to open up a 4-1 lead.

Kwon stayed alive by winning two of the next three games, but Brooksby once again let his serve take care of business to win the first set 6-3.

Down 3-1 in the second set, Kwon held his serve and then rallied from a 30-0 deficit to break Brooksby for a 3-3 tie.

Brooksby responded by breaking Kwon's serve to take a 4-3 lead, putting a backhand volley right down the line for the emphatic final point.

Brooksby won the next game without dropping a point, powered by two aces.

Kwon held his serve to stay alive at 5-4, but Brooksby proved too much for Kwon to handle on this day, as the American held his serve and closed out the match with a backhand winner.

Kwon had been the last South Korean remaining in the singles at the Korea Open, the first ATP tournament in the country since 1996.

"I wanted to play well in front of so many fans here today, and I am disappointed that the match didn't go the way I wanted," Kwon said. "I had a few chances to break Brooksby in the first set, but I think I rushed my shots too much. Things would have been different if I had played with more composure."

Kwon said he let Brooksby dictate the pace of the match instead of taking control himself.

"I am usually an aggressive player, and I had a solid start," Kwon said. "But then the opponent started changing speeds and I didn't have an answer." 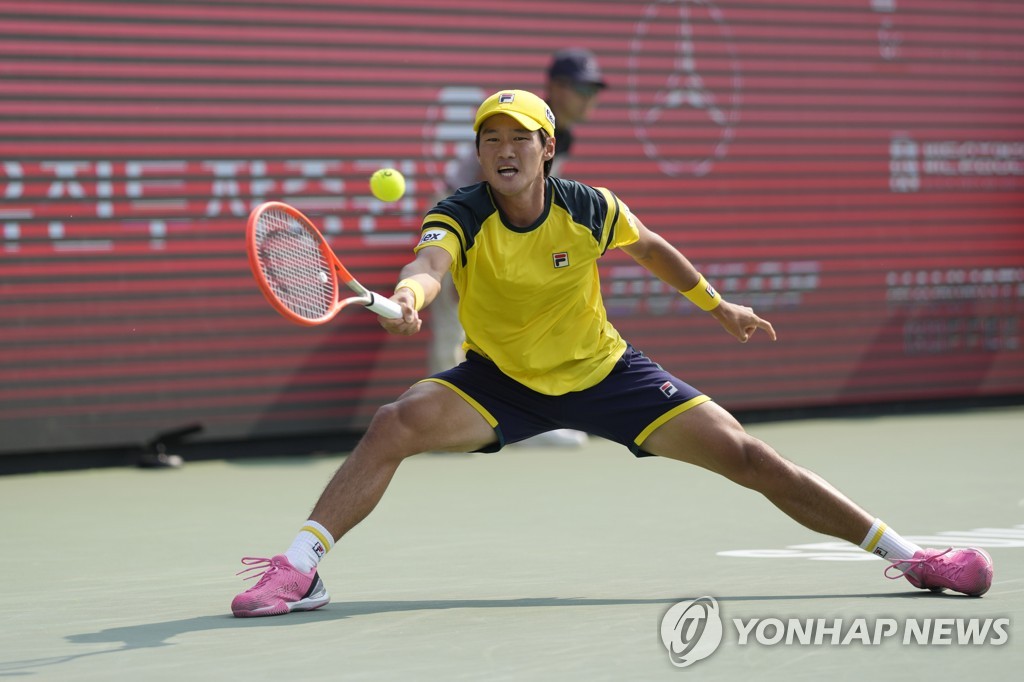 Kwon is still alive in the doubles, along with partner Chung Hyeon. They will play their quarterfinals match Friday.

Brooksby will face No. 2 seed Cameron Norrie in Friday's quarterfinals.

Earlier Thursday, Norrie cruised past Kaichi Uchida of Japan 6-2, 6-2, to advance to the quarterfinals.

Norrie, world No. 8 from Britain, got his first break to take a 3-2 lead in the first set, and then won the next three games thanks to a combination of strong serves and superb groundstrokes.

It was much the same story in the second set, as Norrie looked to be in complete control by winning the final three games to finish the match in just over an hour.

"It's never easy playing your first match in a new place, with different conditions. And honestly, I felt great and I thought the court suited me well," Norrie said after his victory. "It looked like the people in Korea, they love their tennis and there were some good rallies. So hopefully, they enjoyed that."

Norrie, who'd arrived in South Korea on Wednesday after playing in the Laver Cup in London, said he was still jetlagged, and was "slightly nervous" at the start of the match.

He was down 2-1 in the games and then found himself trailing 0-30 before winning the game from deuce thanks to back-to-back aces.

"I played a couple loose points in that game and then I was able to play four good points in a row," Norrie said. "I think that game especially gave me a lot of confidence to progress. I definitely raised my level after that and it was pretty smooth sailing after that." 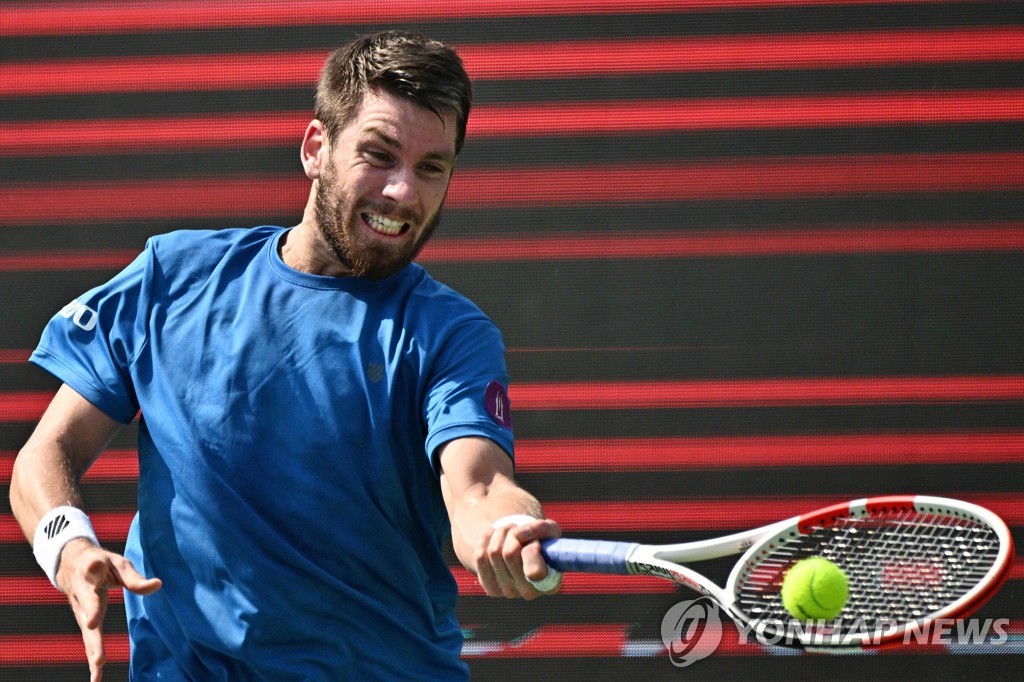 In Thursday's nightcap, the top seed from Norway, Casper Ruud, beat Nicolas Jarry of Chile 6-2, 3-6, 6-3 to reach the quarterfinals. Ruud, world No. 2, will face Yoshihito Nishioka of Japan.

After Ruud won the first set handily, Jarry, ranked 111th, battled back to claim the second set. Up 3-2 in the third set, Ruud broke Jarry and then held his serve to go up 5-2.

Serving for the match at 5-3, Ruud held a triple match point before Jarry forced deuce. The Norwegian dug deep for his sixth ace of the match and then closed the deal when Jarry failed to return the serve.

Also on Thursday, No. 3 seed Taylor Fritz withdrew hours before his second round match due to an unspecified illness. The world No. 12 from the United States was replaced by lucky loser Shintaro Mochizuki of Japan.

Mackenzie McDonald of the U.S. defeated Mochizuki 6-3, 6-4, to set up a quarterfinals date against fellow American, Aleksandar Kovacevic.

The one other quarterfinals matchup will pit Denis Shapovalov of Canada against Radu Albot of Moldova, 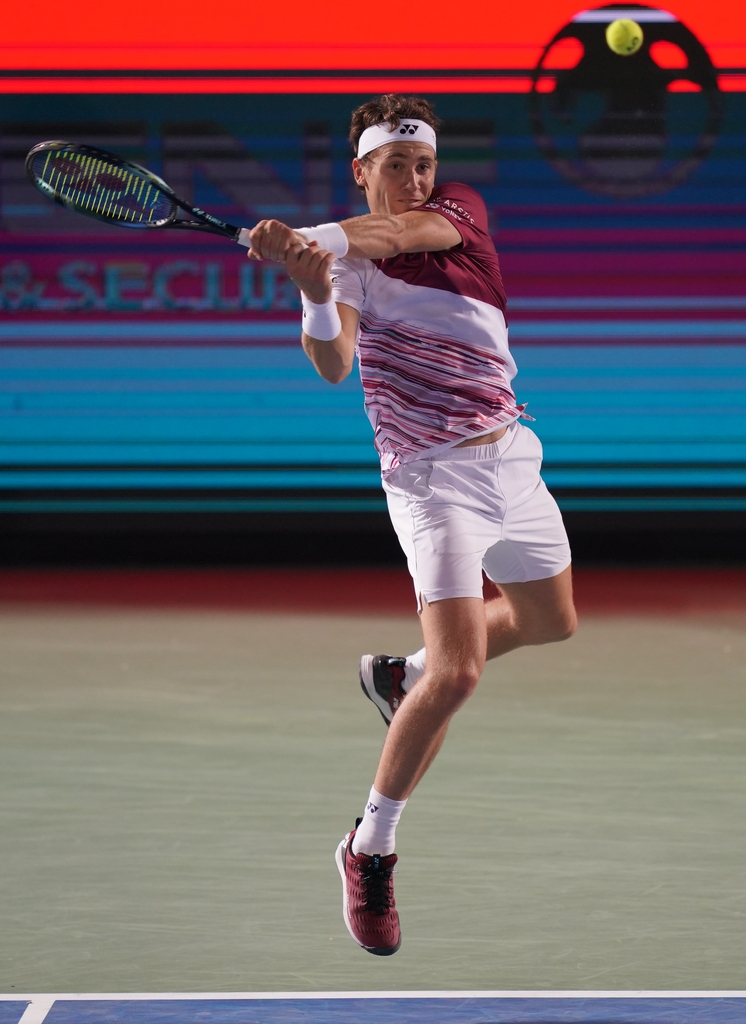