On Wednesday, the index hit an over 2-year low on growing concerns over a global recession.

Trading volume was moderate at about 499 million shares worth some 7.1 trillion won (US$4.9 billion), with gainers slightly outnumbering losers 440 to 417. 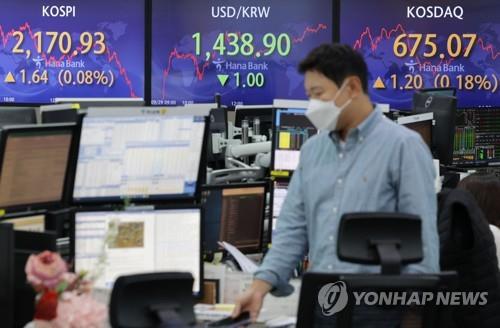 The market opened higher, tracking overnight Wall Street gains on the bond buying by the Bank of England to stabilize its financial markets.

But investor sentiment was again dampened by growing fears of a global economic slowdown.

"The bond buying only temporarily eased concerns but did not remove them entirely. So the market became suspicious over time," Huh Jae-hwan, an analyst at Eugene Investment & Securities, said, adding investors will closely watch the U.S. personal consumption expenditures price index this week and employment data next week.

The local currency ended at 1,438.90 won against the U.S. dollar, up 1 won from the previous session's close.