Korea Electric Power Corp. (KEPCO) said it has decided to jack up the adjusted unit fuel cost -- a key part of the country's electricity rates -- by 2.5 won (US$0.002) per kilowatt hour for the October-December period.

It comes on top of the 4.9-won increase the government has already decided to apply from October.

The planned hike follows a 5 won increase in the unit cost for the previous quarter, which came after two consecutive quarters of freezes. The government approved KEPCO's planned hike of electricity rates earlier in the day. 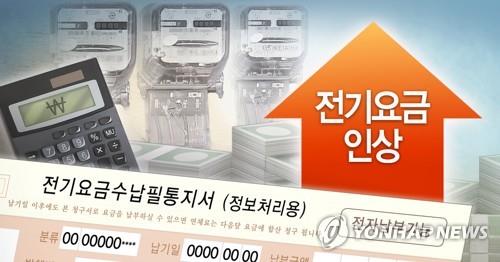 In addition, KEPCO will raise electricity rates for industrial users by up to 11.7 percent for the last quarter.

The industry ministry said earlier that it had been considering plans to impose higher rates on high power-consuming companies.

KEPCO said the fee hike is designed to cope with soaring fuel prices and to help induce households and industrial users to save electricity.

The ministry said in a release, "The electricity rate hike is inevitable in order to tide over an energy crisis. "Major countries have come up with rate hikes and other measures to cope with soaring energy prices."

The rate increase comes amid high global oil and other energy prices, which have sent the state utility company's loss snowballing this year, combined with the local currency's weakness against the U.S. dollar.

International oil and gas prices remain high due to the war in Ukraine and other negatives.