Outbound shipments stood at US$57.46 billion last month, up from $55.9 billion a year earlier, according to the data compiled by the Ministry of Trade, Industry and Energy.

It was the highest outbound shipment for any September since the ministry began compiling related data in 1956.

September also marked the 23rd consecutive month that the country's exports have logged an on-year expansion.

Imports have exceeded exports in South Korea since April, and it is the first time since 1995 that the country suffered a trade deficit for six months in a row.

But the deficit narrowed in September from $9.49 billion the previous month following four months of on-month expansion.

South Korea depends on imports for most of its energy needs, and the country's energy imports surged 81.2 percent on-year to $17.96 billion in September, the ministry said.

Dubai crude, South Korea's benchmark, rose to $90.95 per barrel in September on average from $72.63 a year earlier. 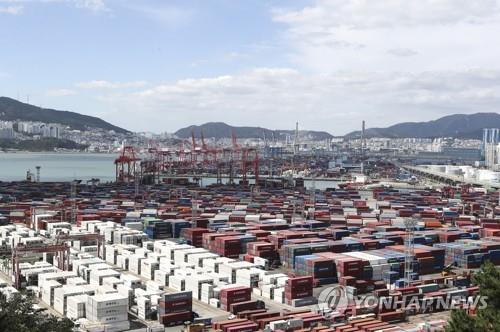 The growth in exports had slowed down in recent months in the face of a slowdown in the global economy amid aggressive monetary tightening around the globe.

By item, overseas sales of semiconductors, a key export item, fell 5.7 percent on-year to $11.49 billion on dwindling demand and a fall in prices amid a global economic slowdown, according to the ministry.

Outbound shipments of chips logged an on-year decline for the second straight month in September following a 26-month-long growth. Semiconductors accounted for about 20 percent of South Korea's exports.

By nation, exports to China and the European Union fell last month, while sales in the United States and the ASEAN nations went up.

Exports bound for the Commonwealth of Independent States tumbled 29.9 percent to $970 million in September over the prolonged Russia-Ukraine war, the ministry said.