SEOUL, Oct. 1 (Yonhap) -- The finance chiefs from South Korea and the United States have reaffirmed that the two countries will cooperate to beef up liquidity facilities should financial market routs around the globe deepen, according to Seoul's finance ministry on Saturday.

Seoul's Finance Minister Choo Kyung-ho and U.S. Treasury Secretary Janet Yellen held a conference call on Friday (Seoul time) and shared the view that South Korea has sound resilience against external shocks on the back of ample foreign reserve and foreign liquidity.

The finance chiefs also highlighted that the real economy and the financial markets are suffering heightened uncertainties due to rollbacks of expansionary monetary policies in major economies and the extended Russia-Ukraine war.

"The two countries are ready to work closely together to implement liquidity facilities when necessary such as when financial instability is aggravated by the spread of liquidity crunch in major economies, including Korea," the ministry said in a statement.

Seoul's presidential office said a currency swap deal could be included in such liquidity facilities.

South Korea's $60 billion currency swap line with the U.S. expired at the end of last year. The Bank of Korea and the Federal Reserve signed the swap facility in March 2020 to ease market routs caused by the pandemic and had extended the deal three times.

On Friday, the country's benchmark index, the KOSPI, hit the lowest level in more than two years and its currency also traded at an over 13-year low against the U.S. dollar, on fears that aggressive monetary tightening moves by the Fed and other central banks may deepen a slowdown in the global economy. 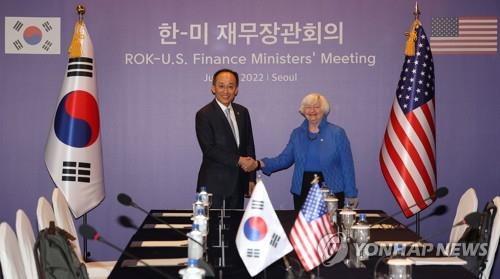