The Korean Central News Agency (KCNA), the official North Korean media monitored in Seoul, said the monumental stone is located in a farm in the Chinese capital.

The unveiling ceremony, which took place Thursday, was attended by Ri Ryong-nam, the North Korean ambassador to China, and Lin Songtian, head of the Chinese People's Association for Friendship with Foreign Countries, along with officials from the Chinese Communist Party and its foreign ministry. 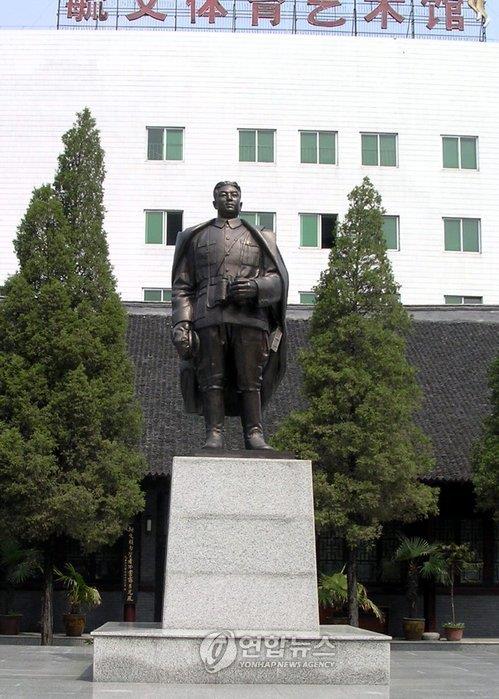 Words engraved on the stone, in both Korean and Chinese, note that the pine tree planted by Kim and former Chinese marshal Ye Jianying on April 20, 1975, "symbolizes the two countries' eternal friendship."

Ye was one of the founding marshals of China and former first vice chairman of the Chinese Communist Party.

Both Ri and Lin paid tribute to Kim and Ye, thanking them for laying the foundation for friendly relations between the two neighbors.

Kim Il-sung's statue stands inside his former school in Jilin, Yuwen Middle School, and the latest piece of commemoration for Kim's feats in China can be seen as Pyongyang's attempt to emphasize its long history of close relations with Beijing, dating back decades to the reign of its founding father.

In congratulating China on its founding anniversary on Saturday, the current North Korean leader, Kim Jong-un, touted his country's ties with China as an "invincible friendship," adding that he will work with Chinese President Xi Jinping to continue to develop the traditional bilateral relations of friendship.