SEOUL, Oct. 4 (Yonhap) -- Prosecutors decided Tuesday to temporarily release the wife of former Justice Minister Cho Kuk from prison for a month to allow her to receive medical treatment for back problems.

Chung Kyung-sim, a former professor of Dongyang University, has been serving the term she got from the Supreme Court in January on charges including forging a presidential citation from her university and getting a false internship certificate to use for her daughter's admission to a medical school in 2013.

The charges against her also included financial misconduct in violation of the Financial Investment Services And Capital Markets Act.

After holding a meeting of its sentence suspension review board Tuesday, the Seoul Central District Prosecutors Office decided to grant the request by Chung and suspend her imprisonment for one month.

Prosecutors initially rejected a suspension request filed by Chung in early August, saying she needs urgent medical operations for injuries she got from multiple falls inside the prison, including a ruptured disc. Chung filed another suspension request last month.

The couple is currently standing trial on a separate academic fraud case involving their son. 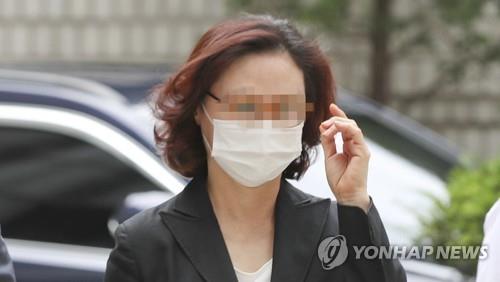