SEOUL, Oct. 5 (Yonhap) -- The main opposition Democratic Party (DP) on Wednesday expressed concerns over the government's plan to abolish the Ministry of Gender Equality and Family and establish a lower-level agency handling related policies under the Ministry of Health and Welfare.

The plan, recently drawn up by the government and the ruling People Power Party (PPP), was one of President Yoon Suk-yeol's most controversial campaign pledges, with high support from young male voters and fierce objections from the opposition bloc and feminist groups.

Degrading the status of gender minister to the head of an agency equivalent to a vice minister means an exclusion from Cabinet meetings, which could lead to a weakening of negotiating power in discussions on policies related to sex crimes, DP spokesperson Oh Yeong-hwan said after the interior ministry briefed the DP of the plan.

"Crimes against women, such as the recent stalking murder incident at Sindang Station, and other major social issues are repeatedly happening, and the United Nations also advises having an independent ministry in charge of improving gender equality," Oh said.

On Sept. 14, Jeon Joo-hwan, a 31-year-old employee of the Seoul Metro, was apprehended at Sindang Station in central Seoul after stabbing a female colleague in her 20s to death in the subway station's ladies' room. Jeon was found to have been stalking the victim.

The DP, meanwhile, said it agrees with the other parts of the government reorganization plan, including launching a government agency for Korean nationals abroad and elevating the status of the Ministry of Patriots and Veterans Affairs.

According to sources, the PPP seeks to table and pass a bill for the reorganization plan next month. 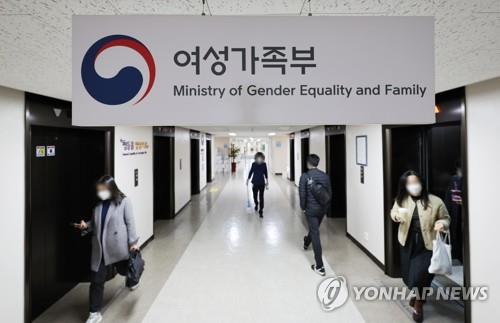