SEOUL, Oct. 6 (Yonhap) -- Samsung Electronics Co. is not considering a cut in production of its memory chips despite slowing demand amid concerns over a global economic recession, a senior executive has said.

"There is no internal discussion (about a cut in memory chip production) at the moment," Han Jin-man, executive vice president and head of the memory global sales and marketing at Samsung Electronics, said at the annual Samsung Tech Day on Wednesday (U.S. time), currently taking place in San Jose, California.

"Samsung's basic position on this matter is that there should not be artificial production cuts," he said, while stressing that Samsung "is trying to make sure there is neither a chronic shortage nor oversupply of chips in the market." 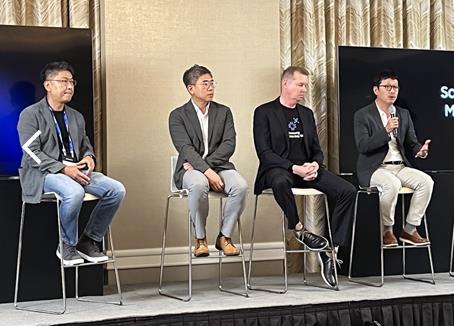 His comments came as U.S. chipmaker Micron Technology said it would cut capital spending by up to 30 percent and chip equipment spending up to 50 percent to slow supply growth in fiscal year 2023.

It is "prudent" to "bring our supply in line with demand" in the current "unprecedented" environment that has impacted demand and caused "the unprecedented level of inventory adjustments by our customers," Micron CEO Sanjay Mehrotra said during the company's earnings call late last month.

Micron is the world's third-largest DRAM maker with a 24.8 percent market share, trailing behind industry leader Samsung with 42.7 percent and runner-up SK hynix Inc. with 27.1 percent, according to global market researcher Omdia.

The U.S chipmaker's performance is closely watched as an early indicator of the chip market's strength ahead of earnings results from Samsung and SK hynix, which will announce their third-quarter results late this month.

On the U.S.-led "Chip 4" initiative with South Korea, Japan and Taiwan, aimed at strengthening Washington's access to semiconductors and weakening that of China, Han refrained from going into the sensitive issue.

"It is an inter-governmental issue," he said, adding that Samsung "is closely watching any development."

At the event, which returned fully in-person for the first time in three years due to the pandemic, Samsung showcased its next-generation memory solutions and chip technologies that, it said, could boost greater capabilities in data centers and the mobile, gaming and automotive markets.

The world's largest memory chip maker also unveiled a vision to become a total chip solutions provider by "maximizing the synergy between" its wide range of products, around 900 in total, that include System-on-a-Chips (SoCs), image sensors, modems, display driver integrated circuits (ICs) and power management ICs.

"In an age that requires machines to learn and think as people do, the importance of logic chips, which play the roles of the brain, heart, nervous system and eyes, is growing to unprecedented levels," Park Yong-in, president and head of Samsung's System LSI Business, said.

"Samsung will converge and combine its technology embedded in various products like SoCs, sensors, DDIs and modems, in order to lead the Fourth Industrial Revolution as a total solutions provider."

Samsung said it will focus more on developing technologies for better performing neural processing units and graphics processing units going forward, which are key to the development of artificial intelligence, robotics, the Internet of Things and quantum computing.

On the memory chip front, Samsung said it will strengthen collaborations with partners, partly to advance in intelligent mobility solutions.

As part of the effort, Samsung said it will open a Samsung Memory Research Center in South Korea by the end of this year, with a plan to add more hubs in the U.S. and other parts of the world in the coming years.