Yoon thanked AMAT CEO Gary Dickerson for deciding to build a research and development facility for semiconductor equipment in South Korea, an announcement that was made during the president's trip to New York last month. 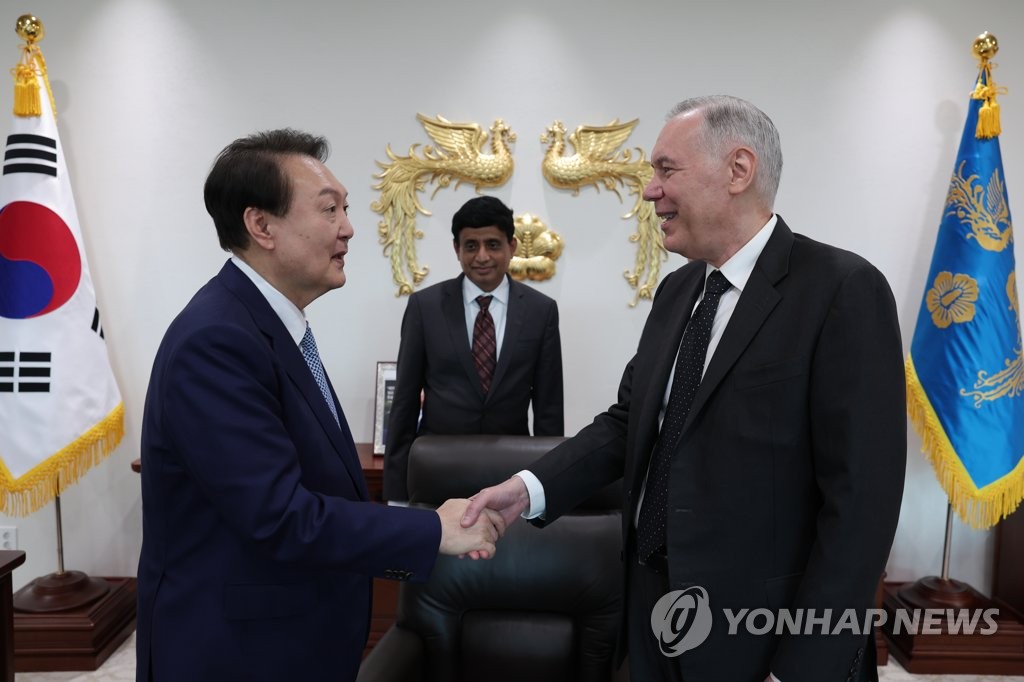 "The investment by AMAT, which occupies a very important place in South Korea's semiconductor industry supply chain, will contribute greatly to strengthening the economic, industrial and technological alliance between South Korea and the United States," he said during the meeting at the presidential office, according to deputy presidential spokesperson Lee Jae-myoung.

Yoon also said the close cooperation between the governments and semiconductor firms of the two countries will play a "pivotal role" in the strong alliance and signed a wafer brought by Dickerson with the words: "AMAT is a symbol of the firm South Korea-U.S. alliance."

The company plans to permanently keep the wafer at its Silicon Valley headquarters, Lee said.

Dickerson shared that he was deeply impressed by South Korea's scientific, technological and cultural advances during his visits to the country over the past 35 years and that he was extremely pleased to be contributing to a stronger alliance with the investment decision.

The CEO also expressed hope for further cooperation with not only the South Korean government but also leading South Korean firms, and requested Yoon stop by AMAT's headquarters when he visits the U.S., Lee said.

AMAT is the global leader in semiconductor equipment and its investment is expected to help launch South Korea into a global hub for the manufacture and innovation of semiconductors, the presidential office said.

ASML, Lam Research and TEL, which rank second to fourth in the global semiconductor equipment industry, have already made similar investments in South Korea, it said.