SEOUL, Oct. 13 (Yonhap) -- The office of President Yoon Suk-yeol is pondering deeply how to cope with intensifying nuclear threats from North Korea amid growing calls that it is time to reintroduce U.S. tactical nuclear weapons to the country or acquire its own nuclear arsenal.

Calls for countering nuclear threats with nuclear weapons have gained traction recently as North Korea has fired off an unusually large number of ballistic missiles, including an intermediate-range missile over Japan, and carried out what it claims to be simulations of nuclear missile strikes on the South.

Concerns have also grown that North Korea will conduct what would be its seventh nuclear test at any time. 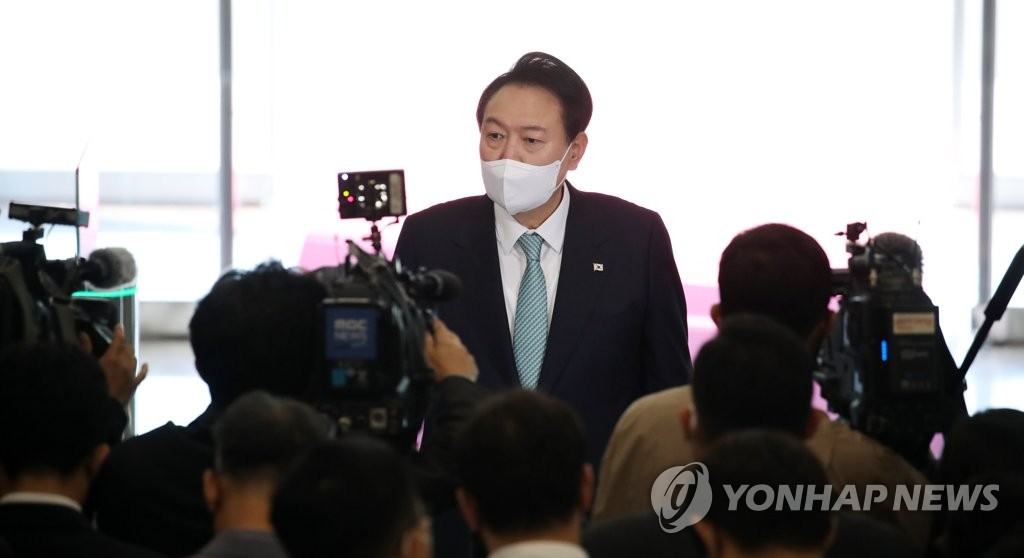 The ruling People Power Party (PPP) has been a main source of such calls, with leader Chung Jin-suk raising the need to scrap the 1991 inter-Korean denuclearization declaration and Rep. Kim Gi-hyeon, a heavyweight, stating the need for South Korea's nuclear armament over the long term.

President Yoon has only said he is looking into various possibilities.

"There are diverse opinions across our nation and in the United States regarding extended deterrence, so I am listening to them carefully and looking carefully at various possibilities," he said Thursday when asked about the possibility of redeploying tactical nuclear weapons.

Extended deterrence refers to the deployment of the full range of U.S. military assets, including nuclear capabilities, to defend an ally, while tactical nuclear weapons refer to those less powerful than strategic nuclear weapons that are capable of annihilating entire cities.

South Korea has been free of nuclear weapons since the U.S. withdrew tactical nuclear weapons from the peninsula in the early 1990s under a disarmament deal with the Soviet Union.

The country is also a member of the Non-Proliferation Treaty (NPT), which it has used as a basis to denounce North Korea's nuclear development. Going nuclear would mean leaving the NPT and facing international sanctions that would deal a blow to South Korea's export-dependent economy.

Presidential officials have said there is no change in South Korea's commitment to the NPT regime, but the situation could change dramatically if the North pushes ahead with what would be its seventh nuclear test and undertakes other provocations.

"At this point, it is difficult to predict how the situation unfolds after the seventh nuclear test," one official said on condition of anonymity because he is not authorized to discuss the sensitive issue on the record.

Earlier in the day, the Chosun Ilbo newspaper reported that South Korea has asked the United States to have strategic assets, such as nuclear aircraft carriers or nuclear submarines, deployed to waters around the Korean Peninsula on a rotational basis around the clock in the event of a nuclear test by the North.

Such an option could help bring nuclear weapons close to the country but not to it, in order to remain within the parameters of the NPT regime.

A presidential official told reporters he had little to add to the president's remarks.

"What I can say for now is that we are consulting, discussing and devising all the means and all the measures to dramatically strengthen the extended deterrence against all possibilities," the official said.

The U.S. is known to be against the redeployment of nukes to South Korea as part of its longstanding policy against the proliferation of nuclear weapons. South Korea's nuclear armament would also unnerve neighbors such as China and Russia and could spark a nuclear arms race across the wider region.

He told reporters he would defer questions about South Korea's position and wishes to the South Korean government, saying, "Our goal is the complete, verifiable denuclearization of the Korean Peninsula, and we believe that there's still a diplomatic path forward to this."

The U.S. strategic assets that are being talked about as candidates for rotational deployment are the USS Ronald Reagan aircraft carrier, B-1, B-2 and B-52 strategic bombers and nuclear-powered submarines.

In July, Defense Minister Lee Jong-sup told a parliamentary session that South Korea continues to be in talks with the United States over the timely deployment of nuclear submarines and other assets in a contingency.