The consensus was reached during a meeting between Trade Minister Ahn Duk-geun and Khalifa bin ali Al Harthy, undersecretary of the Middle Eastern nation's foreign ministry, in Seoul, according to the Ministry of Trade, Industry and Energy.

The officials shared the need to secure stable energy supplies through joint efforts amid growing uncertainties in the global market, particularly as natural gas accounts for about 80 percent of total trade between the two nations.

"They also agreed to expand cooperation further to renewable energy, green hydrogen and other new sectors," the ministry said in a release.

During the meeting, Ahn noted that South Korean companies have taken part in various development projects in Oman, including the Duqm refinery project, and voiced hope for continued contribution to the development of the Middle Eastern nation.

He also proposed holding a joint economic committee meeting at an early date to discuss detailed ways to boost investment and energy cooperation, the ministry said.

During the first nine months of this year, bilateral trade came to US$4.47 billion, far higher than the $3.39 billion for the whole year of 2021, government data showed. 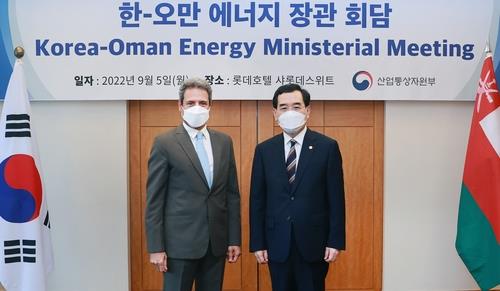