SEOUL, Oct. 20 (Yonhap) -- For the 6 million Ukrainian refugees who fled their homes unarmed and nearly bare-handed since the Russian invasion, "long-lasting" attention from the international community can serve as their own sort of "weapon" to help end the war, a well-known South Korean star actor said.

Jung Woo-sung, a longtime goodwill ambassador for the United Nations High Commissioner for Refugees (UNHCR) Korea, made the remarks during a press conference earlier this week, as he recently came back from a one-week visit to Poland, in his first overseas mission trip in three years due to the coronavirus pandemic.

"The Ukrainian war has drawn widespread attention from many countries since its outbreak, but I feel that it has lost global attention as it has dragged on," he said in a group interview with reporters in Seoul on Wednesday. "The refugees I met were greatly appreciative of the fact that someone was just there to listen to their voices." 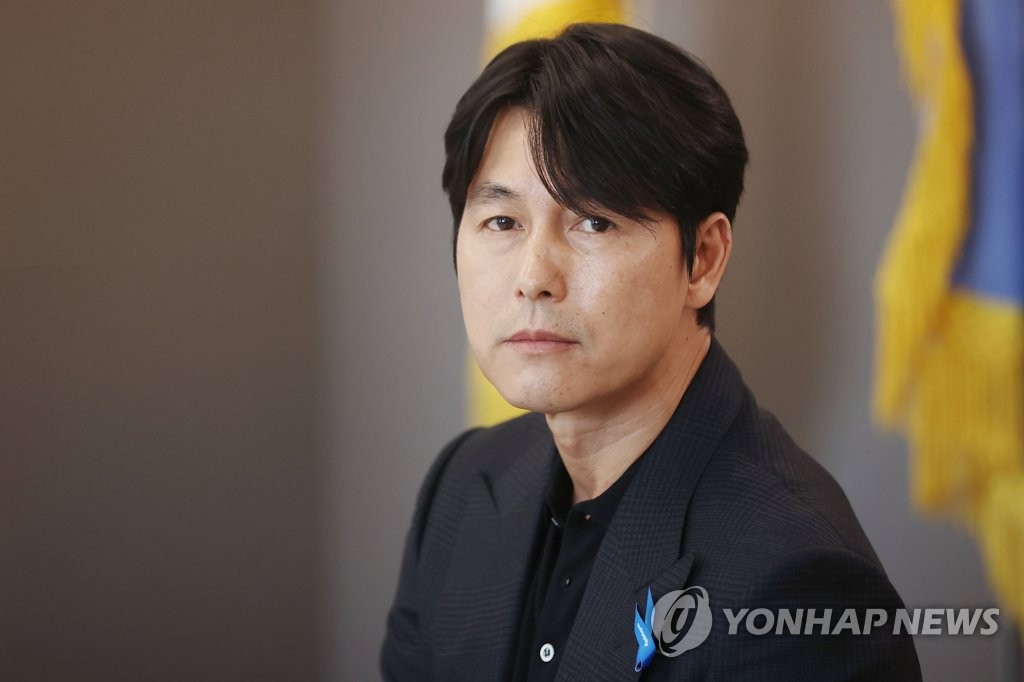 Since the outbreak of the war on Feb. 24, over 6 million Ukrainian refugees have crossed the border into Poland, among which around 1.4 million have registered for temporary protection, according to the UNHCR.

Jung, who has been supporting the works of UNHCR since 2014, said he empathized deeply with some of these refugees he met in Poland as he visited the Blue Dot hubs, support centers established by U.N. agencies that offer various assistance and mental health services. He also spoke with the volunteers and other refugees at the Lublin railways station, where Ukrainians continue to seek shelter.

"I met a refugee in Lublin named Inna who studies art. After she heard that the war had broken out, she hid in her basement and as she looked out the window she saw a tank rampaging the city, which eventually ran over a car with a civilian inside it," Jung said. "It was then she decided to leave Ukraine."

The veteran actor said it's not only the way the Ukrainian refugees have handled emotional grief and challenges that he was impressed with but their resilience and strong will to end the crisis.

"Despite being frustrated and anxious about their lives that were turned upside down in a day, they also showed tremendous strength," he said. "The refugees I met had realistic challenges with the protracted war, but they didn't let go of the last thread of hope that they could go back to their home after the war ends."

Jung called on people to realize that the Ukrainian war can happen to anybody and urged solidarity among civilians to resist with their "voices for peace."

"We must remind ourselves that the challenges the refugees face are not distant from us and can happen anywhere else around the world. ... Europe is in shock that such a war, with attacks launched against innocent civilians, could break out in the 21st century.

"I think that long-lasting attention on refugees and attention itself from a humanitarian point of view can serve as a weapon for them to end the war quickly," he added. "That is the kind of hope I want to share with the community." 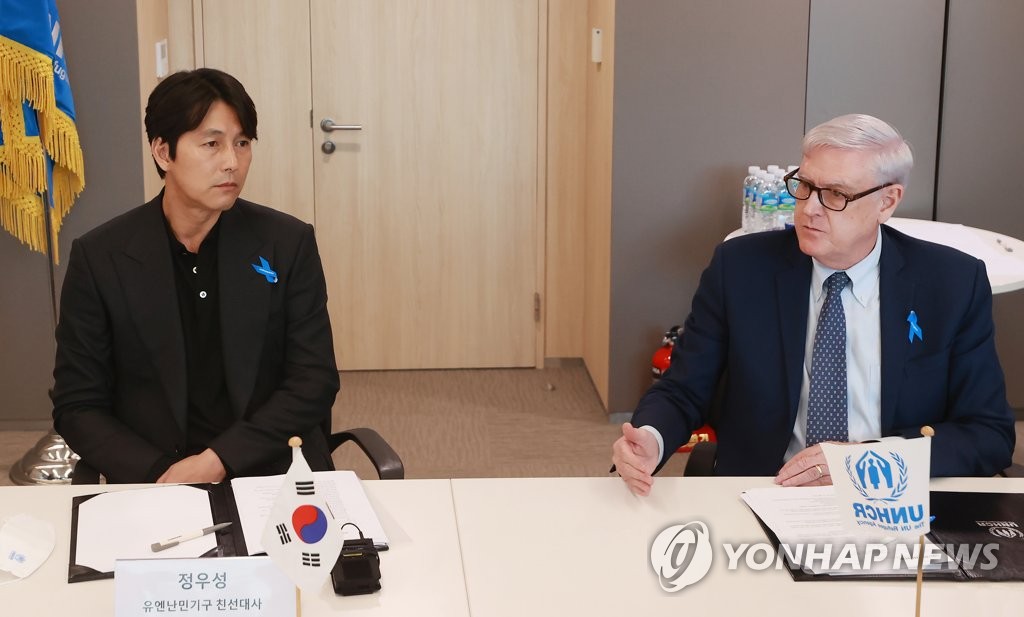 Visiting many refugee camps and witnessing the harsh conditions of many humanitarian crises over the past few years, Jung said he has learned to cope with the reality of having to leave behind the refugees to come back to dealing with his own life.

"Just a few hours after I meet (the refugees) and come back home after a plane ride, I am placed in a completely different environment. ... I think the only thing I can do is to live to my fullest while staying aware of and sharing their pain," he said.

He also urged South Koreans to pay keen interest to the Ukrainian crisis, voicing concerns that a "refugee crisis could also happen right here on the Korean Peninsula" amid the recent escalation of tensions from North Korea.

James Lynch, the outgoing head of UNHCR Korea, also expressed great appreciation to the South Korean government and civic society for their support in addressing the refugee issue as he shared his experiences from the mission trip at the press conference. He said the agency had chosen Poland as it became home to one of the largest population movements of refugees since World War II.

"Most people we talked to from Ukraine, even though they have gone through very traumatic experiences, all hope to be able to go home," Lynch said. "So I think the work that we do and the goal is to work toward some solutions that help us stay optimistic." His three-year stint here is due to end later this month. 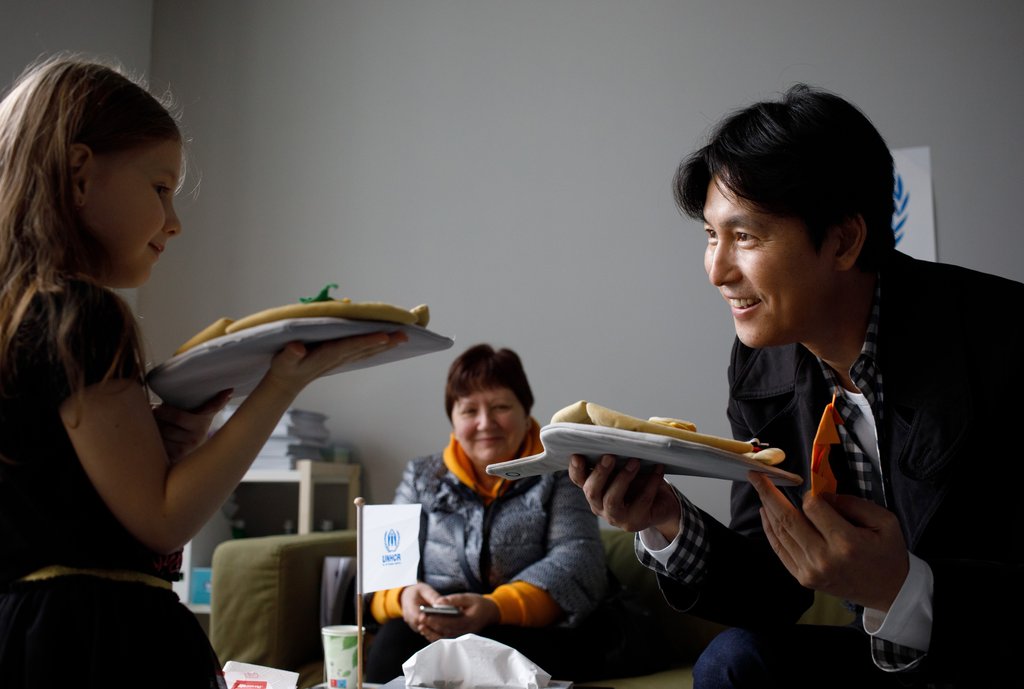