Ahead of the all-electric Jeep model, Stellantis brought the Jeep Wrangler 4xe plug-in hybrid electric vehicle (PHEV) last year and will launch the Grand Cherokeee 4xe PHEV within this year as part of its electrification push.

Moreover, the Netherlands-based carmaker introduced the Avenger, Wagoneer S 4xe PHEV, and the all-electric Recon model at the Paris Motor Show this week. Jeep reckons the Avenger will be the company's best-selling model by the end of 2024.

"We are launching the Avenger in Europe now and so we have proper launch timing in between each of those models, two to three years here in Korea. Avenger is right around the corner," Jake Aumann, managing director of Stellantis Korea, said Thursday during an interview with Yonhap News Agency on the sidelines of the Jeep Camp 2022 media event held in Yangyang, 215 kilometers east of Seoul. 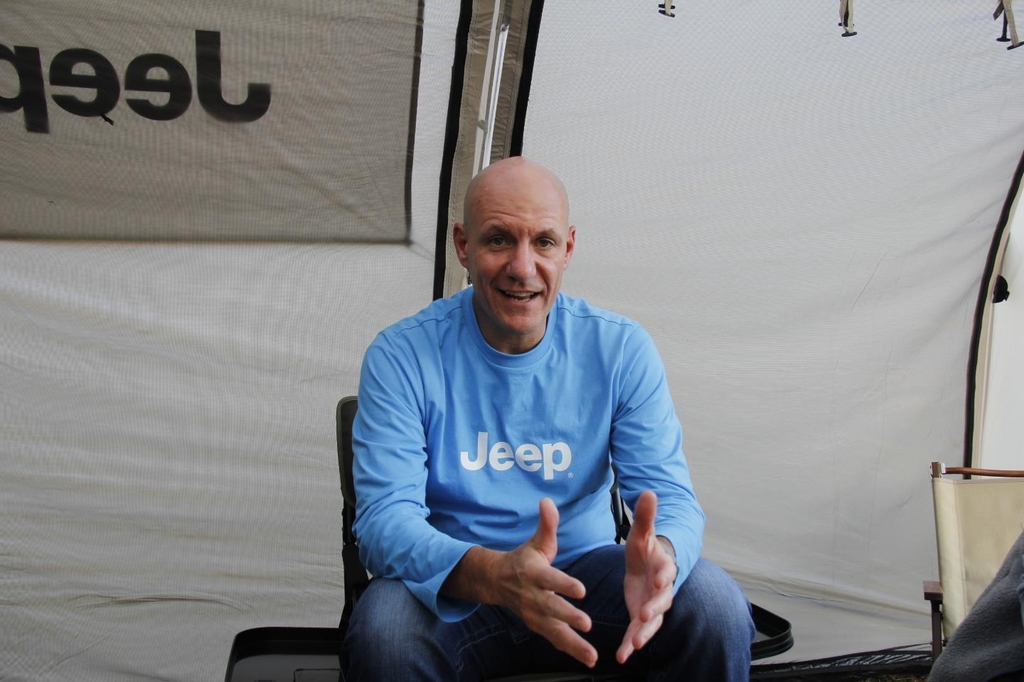 In March, Stellantis announced it will become the industry leader in the combat against climate change, reaching carbon net zero emission by 2038, with a 50 percent reduction by 2030.

From January to September, Stellantis Korea sold a total of 6,751 vehicles under the Jeep, Peugeot, Citroen, and DS brands, down 33 percent from 10,037 units a year earlier. The company stopped selling Citroen models in March to focus on three other brands.

The Jeep brand sold 5,227 autos in Asia's fourth-biggest economy in the first nine months of this year, down 34 percent from 7,950 units amid continued supply chain disruptions. It sold 10,449 units last year.

Asked if Jeep is on track to sell more than 10,000 units this year, the U.S. native said, "(There was) a little bit of momentum in September so we look forward to continuing the momentum throughout the fourth quarter. (But) I am less concerned about sales numbers and more concerned about taking care of customers." As for stereotypes about imported carmakers' after sales services, he said Stellantis "wants to get away from the thought that it is slow to deliver parts that are expensive in after sales which is, by the way, now less expensive than most of the other brands in after sales perspective."

With focus on providing "amazing" customer experience, the company expects upcoming new models will be well accepted in Korea where recreational vehicles become part of people's lives amid the COVID-19 pandemic and "Chabak" craze that has happened.

Chabak refers to the trend of using cars as accommodations that emerged as a new form of travel during the pandemic in Korea, driving up the demand for SUVs.

"If you look at the future of what Stellantis wants to be here, Zero Emissions Freedom with Jeep, the quick progression and the infrastructure development here in Korea has moved very fast. It's moving at a pace that we are bringing forward electrification as well," Aumann said. "So we think Korea is a very important market not just in the Indo-Asia Pacific region but also within global terms as well."

Looking ahead, the executive picked higher costs and supply chain disruptions as major challenges for all manufacturers in 2023 but struck a positive note about future vehicle sales in Korea.

"If you're driving from Seoul to here, every stop has electric vehicle chargers. If you go into your apartment building, a lot of places have EV chargers. So I think that progression has been very fast once it was decided to be done. So I expect it will continue as well," he said.