SEOUL, Oct. 25 (Yonhap) -- Disney+'s new TV series "Shadow Detective" carefully placed clues throughout its eight episodes so viewers can put the pieces together to unravel the mystery behind a murder case, its director said Tuesday.

The Korean-language series directed by Han Dong-hwa follows a veteran detective named Kim Taek-rok (Lee Sung-min), who finds himself falsely accused of the murder of his colleague.

Kim is blackmailed into reinvestigating his former cases by a mysterious person and collaborates with his younger boss, Kook Jin-han (Jin Goo), to get to the bottom of the murder accusation.

"The series has the charm of a mystery game," Han said during a press conference in Seoul. "Once you begin watching the first episode, you'll be hooked to the final."

Han said he was attracted to the script that features an old detective suffering from psychological trauma as the main character.

"Unlike my past thrillers, (the series) has elements of humanism," Han said.

Lee, 52, said he tried to focus on the changing emotions of the detective, who was forced to revisit his past cases to track down the real murderer.

"Thanks to its intriguing plot, I think it will be a drama that will make the audience guess and chase down (the real murderer) together," Lee said.

The first two episodes of "Shadow Detective" will be released Wednesday. 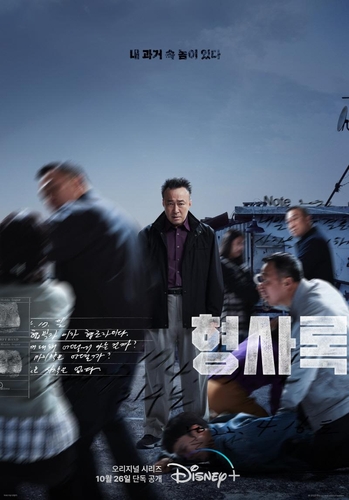