SEOUL, Oct. 31 (Yonhap) -- Questions are increasingly raised as to whether the Itaewon disaster could have been prevented with preparatory safety measures by the administrative authorities and police.

Some critics say the Seoul city government, the office of Yongsan Ward to which Itaewon belongs and police should have taken sufficient accident prevention measures in anticipation of a record Halloween crowd, whereas others say the disaster was beyond the realm of prediction.

At least 154 people have been killed in the deadly stampede in a narrow 3.2-meter-wide downhill alley in Itaewon late Saturday night. 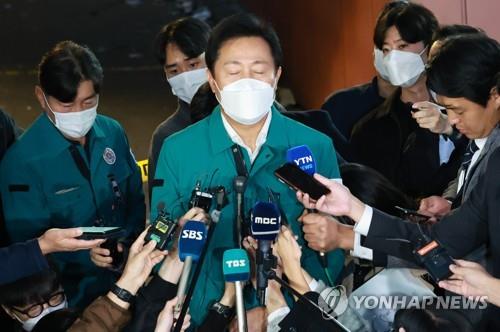 A crowd of nearly 100,000 people was expected to flock to the nightlife district Saturday to celebrate the first Halloween event without social distancing restrictions, including outdoor mask-wearing rules, in three years.

Critics are asking questions about why and how the administrative authorities and police had failed to prepare in advance against crowd-related accidents.

They say there was a kind of prior warning signal, as eyewitness accounts have said on social media that some people were pushed by the crowd and fell in the same alley the previous night but were not injured after other people stopped moving. Eyewitnesses also said it was already difficult to walk around in Itaewon on Friday due to a huge crowd.

Despite the apparent warning signals, however, the Seoul city government did not seem to have taken any specific measures to avoid Halloween-related safety accidents in advance.

"We did not prepare special measures or operate a situation room for Halloween, because no large-scale event was scheduled by an organization in Itaewon," said a Seoul city government official, adding the concerned ward office has mapped out accident prevention measures.

In contrast, the municipal government had established safety measures, including control of roads and deployment of safety personnel, for the 2022 Seoul International Fireworks Festival held in Yeouido, central Seoul, on Oct. 8 in anticipation of a crowd of 1 million.

The Yongsan Ward office held an emergency meeting Thursday under the supervision of its deputy head to discuss Halloween-related safety measures for the Itaewon area, but the discussions were reportedly focused on COVID-19 quarantine measures, inspection of facilities and restaurant food safety.

Control of roads and one-way passing for many narrow alleys, where Halloween events were concentrated, were not implemented.

The ward office said about 150 civil servants in 28 teams were deployed to Itaewon from Thursday to Saturday, but it seemed the manpower was not enough to cope with the tens of thousands of people.

The Seoul police also said they deployed about 200 officers to Itaewon on Saturday, though their tasks were mostly focused on cracking down on sex crimes, drugs and theft, instead of safety management.

Minister of the Interior and Safety Lee Sang-min also said this year's Halloween crowd in Itaewon was not worryingly large compared with previous years and the police force was kind of scattered due to riots and demonstrations all over the city on the same day.

Critics and online commentators have also said subway trains should have passed through Itaewon Station on Subway Line 6 without stopping Saturday night, in order to adjust the traffic volume around the crowded district.

But Seoul Metro explained that bypassing Itaewon Station was not appropriate, because the start and end times of Halloween events were not fixed and the crowd did not surge at a specific time.

Many safety experts still point out the disaster may have occurred due to a mix of other factors, including collective panic, an unsafe environment and unsafe behaviors.

"The Itaewon disaster was beyond the realm of prediction, as the accident occurred because an unspecified number of people gathered in an uncontrolled environment," said a university professor, calling for the installation of more surveillance cameras in accident-prone areas and real-time analyses of population density for the activation of relevant safety measures.