SEOUL, Nov. 1 (Yonhap) -- Police stepped up an investigation Tuesday into the deadly Halloween crowd crush in Seoul's Itaewon district amid various blame and claims about possible causes as South Korea reels from the deadlist disaster in years.

National police chief Yoon Hee-keun also acknowledged shortfalls in the police response to the crowd surge that left at least 156 people killed and 30 others seriously injured, and promised to look thoroughly into what went wrong and who is responsible.

The tragedy happened Saturday night when a massive crowd of Halloween partygoers packed a narrow 3.2-meter-wide alley in Seoul's entertainment district of Itaewon. Some of them began to fall over, causing others to fall down like "dominoes" and pile up on one another.

Various claims have since been raised among surviving victims and eyewitnesses about what caused the sudden crowd surge on the narrow alley and the subsequent deadly crush, with some claiming deliberate pushing could have been a trigger.

Police are looking into testimonies from dozens of eyewitnesses and surveillance camera footage to reconstruct the circumstances of the Saturday night crowd surge, according to police officials.

At the center of the claims is a suspicion raised through social media and news interviews that some people on the upper side of the sloped alley cried "push, push" and thrust other people, resulting in the deadly crush.

Allegations have also arisen that a massive crowd of people surged into the narrow alley to see a celebrity visiting the area at that time.

According to police officials, a police investigation is currently under way into those claims, although no criminally punishable acts have been identified so far.

Nam Gu-jun, chief of the National Office of Investigation, said a 475-member special investigative team had interviewed 44 eyewitnesses as of Monday and secured 52 pieces of surveillance camera footage in 42 places around the scene to determine the exact cause of the accident.

Videos posted on social media were also being scrutinized, he said.

Some survivors have also claimed operators of stores along the alley blocked the entrances to people fleeing the crushing crowd, although experts said it would be nearly impossible to criminally punish them for "denying voluntary rescue."

Many expect the investigation could also be directed toward police in charge of the precinct and the municipal government of Yongsan that administers the Itaewon neighborhood for failing to carry out advance accident prevention measures in negligence of their safety management duties. 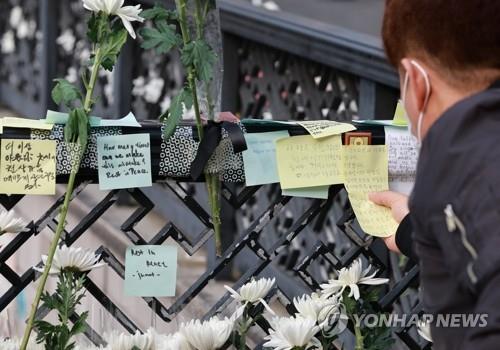 Interior Minister Lee Sang-min apologized in a parliamentary session for the deadly crowd collapse, saying, "I deeply apologize to the people that the recent accident occurred despite the state bearing infinite responsibility for the people's safety."

The National Police Agency separately said Tuesday an inquiry will be launched into the Yongsan Police Station in charge of policing Itaewon to determine if the station provided proper safety management services for Halloween gatherings Saturday.

Police came under fire for lax public order maintenance after it was revealed that only about 200 police officers were dispatched to Itaewon on Saturday, mainly for sex, drug and theft crackdown missions, although about 100,000 people were reported to show up for Halloween celebrations.

National police chief Yoon Hee-keun acknowledged scores of reports seeking police intervention against crowds had been filed right before the deadly crush, but police did not properly respond to prevent the accident.

"I wish for a quick recovery for those who were injured and feel heavily responsible toward the public who have been greatly shocked," Yoon said, offering an apology and pledging an independent, outside probe into the alleged police wrongdoing.

Yoon also said police will look into whether Hamilton Hotel, whose outer wall runs along one side of the sloped alley, violated relevant construction laws, after reports that the hotel extended part of its wall along the alley, causing a section of the narrow alley to become even narrower.

In a Cabinet meeting Tuesday, President Yoon Suk-yeol called for fundamental measures to prevent a repeat of the tragedy, saying it clearly revealed the importance of crowd management.

"We need to actively use drones and other advanced digital capabilities to develop crowd management technologies and make the necessary institutional improvements," he said, adding a meeting will be held soon with relevant ministers and experts to review the national safety system.

Yoon later visited a mourning altar for the victims at Noksapyeong Station near the site of the accident. He was joined by members of the Cabinet and the presidential office.

"My sadness and grief are beyond my control. I will do my best to prevent such a tragedy from happening again," Yoon wrote in a condolence book after paying his respects. 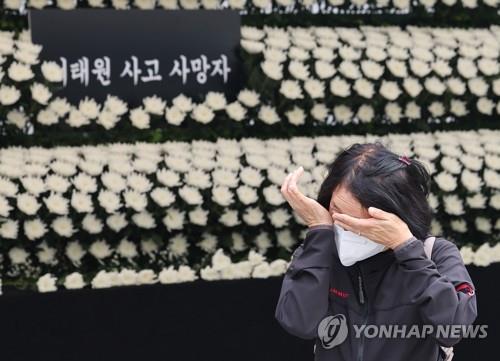 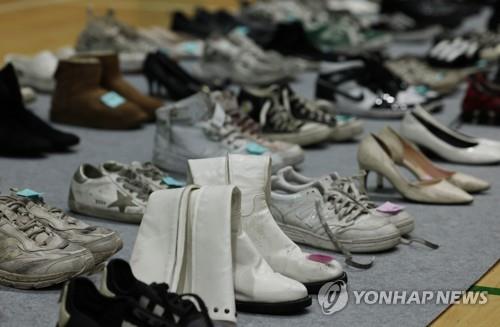 The Itaewon tragedy marked the deadliest crowd crush in South Korea's history and the worst disaster the country has seen since 2014, when the ferry Sewol sank in waters off the south coast and killed 304 people, mostly high school students.

Two-thirds of the victims, or 103 people, were in their 20s, and 100 of those killed were women, due largely to what experts say is their relatively smaller frame and less muscle mass to resist crushing pressure.

President Yoon declared a weeklong mourning period till Saturday, and mourning altars have been set up nationwide to allow people to burn incense and pay their respects to those killed.