SEOUL, Nov. 1 (Yonhap) -- Religious leaders on Tuesday visited a mourning alter for those killed in the country's worst crowd crush in history.

The representatives of the country's seven main religious orders paid tribute to the victims at a joint memorial altar set up at the public plaza in front of Seoul City Hall.

At least 156 people, mostly in their 20s, were killed and dozens more injured when a surge of people tried to move through a narrow alley in the popular nightlife district of Itaewon during Halloween celebrations Saturday.

The leaders are affiliated with the Korean Conference of Religions for Peace -- one of the country's two umbrella organizations made up of religious organizations for Protestantism, Catholicism, Buddhism, Won Buddhism, Confucianism, Cheondo-gyo and the Association for Korean Native Religions. 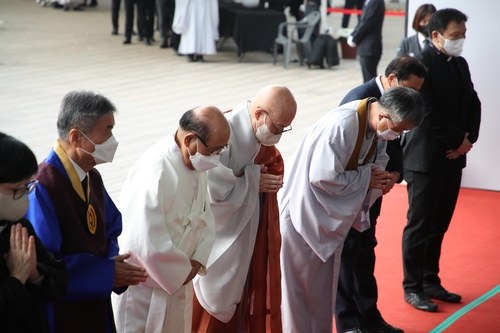 After paying their respects to the victims together, the leaders separately prayed for the victims with other delegates from their religion.

"There should never be such a disaster again, and we pray for the victims' rebirth in paradise," Ven. Jinwoo, executive chief of the Jogye Order, the largest Buddhist sect in South Korea, wrote in a guest book.

"I'm very sorry that an unthinkable disaster has occurred, and I think the people and everyone's hearts are broken," he told reporters after visiting the mourning altar. "The whole country should make efforts to prevent such an unfortunate accident from happening again."

Na Sang-ho, head of Won Buddhism, said: "It hurts my heart that young people fell victim to this incident. I pray for the repose of their souls and hope they will come back to us with a comfortable mind."

He expressed hope the nation will work together to heal the hearts of the bereaved family members.