Last month, the Bank of Korea raised its key policy rate by 0.5 percentage point to 3 percent to tackle inflation. It marked the second-ever big-step increase and the eighth hike in borrowing costs since August last year amid inflation pressure.

"I would guess in the South Korean case for (a 0.5 percentage-point rate hike) with a 5 percent inflation rate, there's no question, in my view, it was too low," Anne O. Krueger, a former World Bank chief economist, said Thursday in an interview with Yonhap News Agency in central Seoul. She was in Seoul for an international conference on economic challenges. 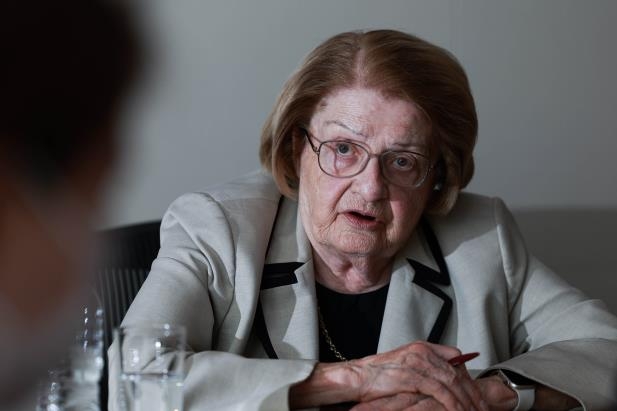 The former first deputy managing director of the International Monetary Fund also suggested that without a rate hike in South Korea, the rate differential could have widened further, which would prompt capital outflows from local financial markets in pursuit of higher returns.

"If the interest rate here is one-half of 1 percent and the U.S. rate had gone up to 5 percent, South Koreans are going to go and buy American securities, and then you'll have a depreciating currency, and that will make the inflation worse," Krueger said.

Earlier this week, the U.S. Federal Reserve raised its benchmark rate by another 75 basis points to a target range of 3.75 to 4 percent, a move that could put pressure on South Korea to further tighten its monetary policy.

The IRA, signed into law by U.S. President Joe Biden in August, gives up to US$7,500 in tax credits to buyers of electric vehicles assembled only in North America, sparking concerns that South Korea's Hyundai Motor and Kia Corp. could lose ground in the U.S. market, as the two South Korean carmakers make EVs at domestic plants for export to the United States.

"I don't think the subsidy is going to be very much, and I do not think it will last very long, because I think there is enough opposition to it, plus not enough money," Krueger said.

Her comments came as South Korea has recently hired a domestic law firm and has been working to select a foreign one in preparation for filing complaints against the U.S. with the WTO or the Korea-U.S. Free Trade Agreement mechanism, as the IRA could run afoul of their principles.

Krueger said she thinks there are producers that are coming from overseas to produce in the U.S. to avoid (the problems of the IRA).

"By the time those things have happened, they will figure they shouldn't do it. So I think they probably will decide it was a mistake before too long, but I don't know that. I hope so. But yes, you're right, that's a very bad thing," she said.

The facility will produce electric models for Hyundai Motor Co., including its luxury brand Genesis, as well as other models for its smaller affiliate Kia Corp.

Hyundai Motor Group also said it could start producing the all-electric version of the Genesis GV70 SUV at its Alabama plant late this year.