The Joint Chiefs of Staff (JCS) said it detected the launch from the Sunan area in Pyongyang at 10:15 a.m., and that the missile flew around 1,000 kilometers at an apogee of some 6,100 km at a top speed of Mach 22.

The launch is presumed to have involved the Hwasong-17 ICBM, according to an informed defense source who requested anonymity. On Nov. 3, the North test-fired the same ICBM, but the launch was seen as a failure.

The Hwasong-17 is dubbed a "monster" for its sheer size. It is known to carry multiple warheads and have a range of around 15,000 km, long enough to cover the entire U.S. mainland.

"North Korea's ICBM launch this time is a significant provocation and serious act of threat that undermines peace and stability not only on the Korean Peninsula but also in the international community and a clear violation of U.N. Security Council resolutions," the JCS said in a text message sent to reporters.

It added that the South Korean military will maintain a firm readiness posture capable of responding "overwhelmingly" to any North Korean provocation while tracking and monitoring related North Korean movements in close cooperation with the U.S.

JCS Chairman Gen. Kim Seung-kyum and Gen. Paul LaCamera, the commander of the South Korea-U.S. Combined Forces Command, held virtual consultations over the launch and reaffirmed their commitment to keeping a more solid allied defense posture, according to the JCS.

The launch came just a day after North Korean Foreign Minister Choe Son-hui warned her country will take "fiercer" military actions if the U.S. strengthens its security commitment to using a full range of military capabilities, including nuclear options, to defend the allies.

Choe's statement stoked concerns that the North is shifting the responsibility for a rise in regional tensions to the U.S. and its allies -- in an ominous sign that it is headed toward a bigger provocation, like a nuclear test.

Shortly after her statement, the North lobbed a short-range ballistic missile into the East Sea.

The North's reaction followed a trilateral summit among President Yoon Suk-yeol and his U.S. and Japanese counterparts, Joe Biden and Fumio Kishida, respectively, on the margins of annual regional gatherings in Phnom Penh on Sunday.

There, the trio agreed to work together to strengthen deterrence, with Biden reiterating Washington's "ironclad" security commitment to Seoul and Tokyo.

The North previously tested an ICBM on Nov. 3. The test, thought to have involved the Hwasong-17, did not succeed as it failed to fly as intended, following its second-stage rocket separation, according to sources.

Observers said the North has made headway in its ICBM program, but questions still linger over whether it has mastered the atmospheric reentry technology. 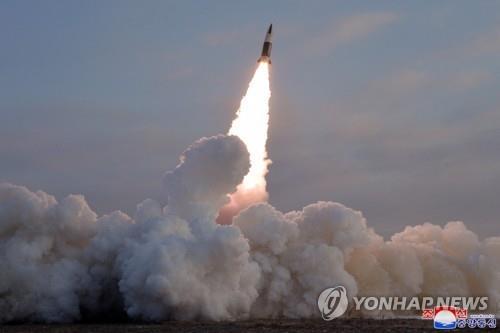