The message reverberated throughout Thursday, as Defense Minister Lee Jong-sup and his U.S. counterpart, Lloyd Austin, held their annual Security Consultative Meeting (SCM) at the Pentagon, laid a wreath at a Korean War monument, and toured the Joint Base Andrews operating B-1B and B-52 nuclear-capable strategic bombers.

At the SCM, Lee and Austin highlighted their resolve to strengthen the alliance into a "deep and comprehensive strategic" relationship and laid out novel areas of deterrence cooperation to counter evolving North Korean nuclear and missile threats. 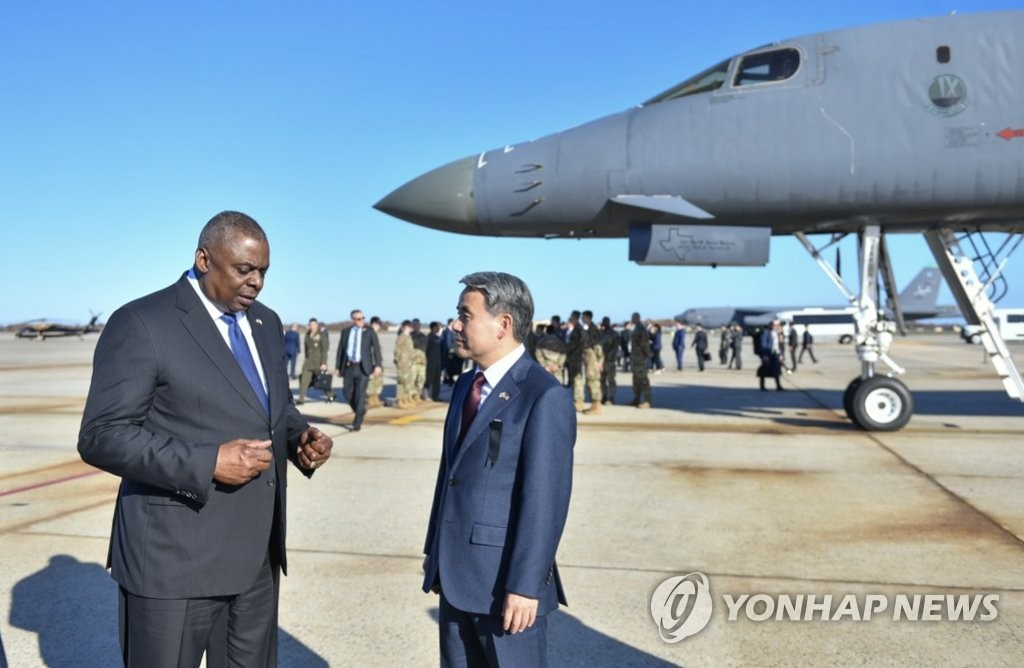 The ministerial meeting took place following a series of North Korean missile and artillery firings, including the apparently botched launch of an intercontinental ballistic missile (ICBM) on Thursday (Korea time).

Noteworthy at the SCM was that the two sides spelled out four specific categories of deterrence cooperation -- information sharing, consultation process, joint planning and execution -- in a decision that would pave the way for Seoul's involvement in those areas, where its role has largely been limited or absent.

The move came amid calls for Seoul to pursue a nuclear sharing arrangement like that of the North Atlantic Treaty Organization or take other measures to cope with the North's advancing nuclear capabilities.

Adding to the allies' deterrence efforts is an agreement to expand the frequency and intensity of the deployment to and around the Korean Peninsula of U.S. strategic military assets to create the effect of permanently stationing them, according to Lee.

Seoul and Washington have been discussing the issue in the wake of Pyongyang's continued saber-rattling and its preparations for what would be its seventh nuclear test.

In their joint communique issued after the talks, the Pentagon chief even used the expression -- the "end" of the Kim Jong-un regime.

He warned that "any nuclear attack against the United States or its Allies and partners, including the use of non-strategic nuclear weapons, is unacceptable and will result in the end of the Kim regime."

Strategic assets usually refer to a nuclear-powered aircraft carrier, nuclear-capable bombers and other assets with a powerful deterrence effect.

Some raised doubts over the efficacy of the deployment of strategic assets as Pyongyang fired a missile even when the USS Ronald Reagan aircraft carrier -- a symbol of America's naval might -- was near the Korean Peninsula last month.

Austin brushed aside such doubts.

"Yes, I believe our activities are effective and are deterring," he told reporters after the SCM session.

Later in the day, Lee and Austin jointly visited Joint Base Andrews in Prince George's County, Maryland, where they were briefed on key features of nuclear-capable B-1B and B-52 strategic bombers.

"This visit is aimed at clearly showing to the South Korean public the U.S.' ironclad extended deterrence commitment to defend the South," Seoul's defense ministry said in a press release.

On Thursday alone, Lee and Austin spent over seven hours together in a sign that both Seoul and Washington highly value the longstanding bilateral alliance, according to Seoul officials.

Credited with informing a 2011 operation to kill Al Qaeda leader Osama bin Laden, NGA is tasked with collecting, analyzing and distributing geospatial intelligence -- from spy satellites and reconnaissance aircraft to drones and other assets -- to support security and other operations.