SEOUL, Nov. 4 (Yonhap) -- Multimedia artist Kang Ik-joong said Friday he wants to play a bridging role between the divided Koreas through his imaginative artworks, as he believes art can connect people, places and ideas.

The New York-based Korean artist, known for his art projects involving moon jars and the Korean alphabet, hangeul, will showcase a wide range of his artworks in the exhibition "The Moon is Rising," which runs through Dec. 11 at Gallery Hyundai in Seoul. It is his first solo exhibition held in South Korea in 12 years. 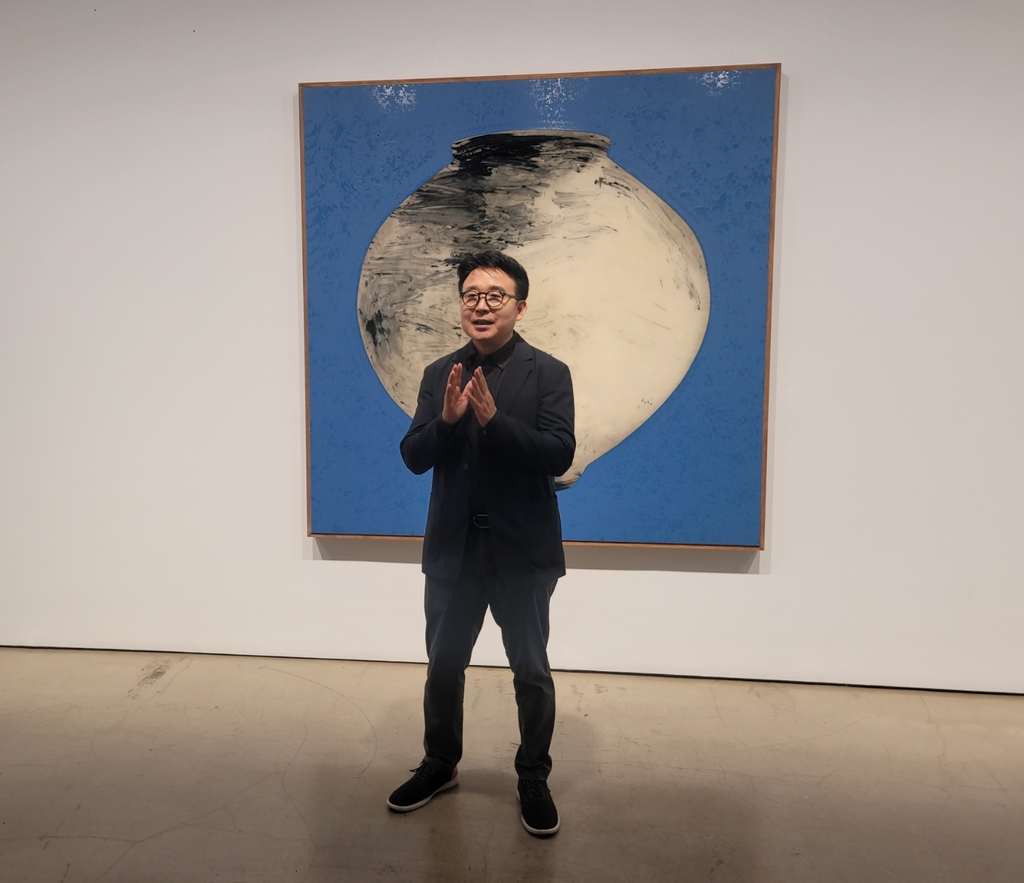 The 62-year-old artist said "connection" is the overarching theme of the exhibition, which presents approximately 500 artworks of paintings, installations, project sketches and drawings since the 1990s.

Among them are the latest paintings of rainbow moons and moon jars, traditional Korean white porcelain made during the Joseon Dynasty (1392-1910).

The exhibition also features a mixed-media wall mosaic of colorful three-by-three inch tiles, with each piece composed of one alphabet syllable and completing a sentence when put together.

"Art is ultimately about finding my current location," Kang said during a press conference held at Gallery Hyundai. "I think my job is about connecting the divided Korean Peninsula through culture."

Kang said his long-cherished dream is building a circular bridge that connects the north and south sides of the Imjin River on the heavily fortified border. He wants to make it a huge artwork with paintings of children from South and North Koreas.

"The envisioned bridge is a dream that connects Korea with the world as well as the past, present and future," he said. His past efforts to collect paintings from North Korean children have failed due to continued military tensions on the peninsula, but the artist remained hopeful about the ambitious project.

"If such a bridge is built over the Imjin River, I want to cross it and enjoy the artworks of children (of the two Koreas)," he said.

Kang expressed his wish for a unified Korea in a mountain-like installation composed of 500 white bowls, which was displayed in a corner where visitors can hear the sound of birds singing.

"I tried to express the sad reality. People (of the two Koreas) can't cross the border, but birds can," he said. "I hope the time will come when we can put rice into the bowls and share them."