SEOUL, Nov. 7 (Yonhap) -- The labor unions of Seoul Metro, the operator of the Seoul subway system, threatened Monday to go on a general strike starting in late November if the company does not redress its plan to downsize the workforce.

Unionized workers of Seoul Metro have been protesting that the company discarded an agreement signed with them in May to hire more subway workers in order to resume late-night subway services suspended due to the COVID-19 pandemic.

Seoul Metro has countered it has no plan to cut the workforce in charge of safety maintenance and only plans to outsource peripheral work, such as in-house cafeteria services.

During a press conference, representatives of Seoul Metro's two labor unions said they will go on a general strike starting Nov. 30 if the company and the Seoul city government, which manages Seoul Metro, do not up come up with measures to redress the downsizing plan or to secure enough safety maintenance workers.

The two labor unions, with one affiliated with the Korean Confederation of Trade Unions and the other with the Federation of Korean Trade Unions, argued the downsizing plan goes against growing calls for workforce reinforcement in the wake of a recent suspected stalking murder of a female Seoul Metro employee by a male colleague, which occurred while she was working alone.

"If Seoul Metro abandons its duties to ensure the safety of workers and citizens, we will stand on the citizens' side by resolutely staging a general strike," Myung Soon-pil, a labor union leader, said during the press conference in front of Seoul City Hall.

The strike, if carried out, is expected to lead to significant disruptions in train services on Subway Lines 1 through 8, with the weekday train operating rates on Lines 1 and 4 expected to go down to 53.5 percent and 56.4 percent, respectively, from the normal levels.

Corresponding rates on the weekend are predicted to go down to some 50 percent.

In a recent four-day plenary vote conducted last week, 79.7 percent of the unionized Seoul Metro workers who cast a vote supported the general strike plan, according to union officials. 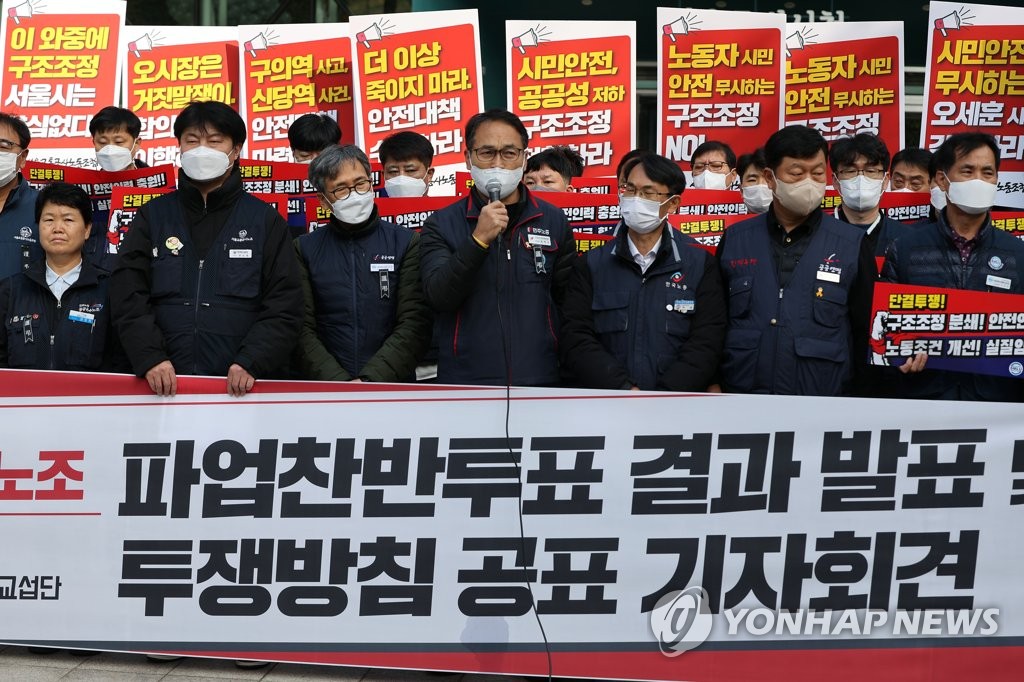