Every June, the MSCI reclassifies its watch list of advanced markets, based on the countries' economic development, size and liquidity of equity markets, and market accessibility for foreign investors.

If South Korea is added to this watch list, it would then be eligible for a review to join the MSCI's developed markets index, widely seen as a gateway to attract more global investors to Asia's fourth-largest economy.

South Korea has been trying to upgrade its status to a developed market since 1992, when it joined MSCI's emerging markets index.

"For now, we have not yet seen significant action. So that's obviously the reason why there was no inclusion in June," Henry Fernandez, chairman and CEO of the MSCI, said in a brief interview with Yonhap News Agency on Friday during his visit to Seoul. 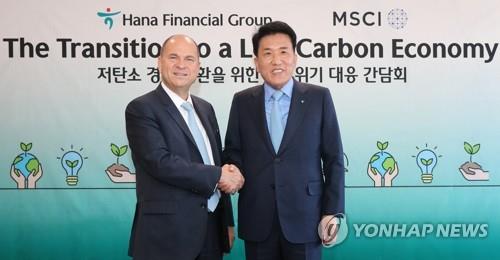 In June, the MSCI again classified South Korea as an emerging market, citing the South Korean financial market's lack of accessibility for foreign investors. South Korea has to wait until June next year to try again for the MSCI's watch list of developed market status.

Fernandez suggested it may be difficult for South Korea to make the MSCI's watch list in June 2023.

"You have to have a huge amount of progress made for a chance to do it next year. The time frame is too short," he said.

"But the good thing is that the current administration and the prior administration have been focused on this issue to try to eliminate what people call the 'Korea discount' in equity markets. And that one potential benefit, or outcome of that, would be an upgrade of the country (to developed market status)."

"The first one, and the most important one, is the ability to trade the Korean won in the spot markets of the major financial centers of the world. That's the biggest issue by far," he said.

"The second issue is the process of registration (for foreigners), the process of securities. That is -- people are talking about changing it -- a 30-year-old system," he added.

Fernandez said the third issue is the "ability of being able to have access to the country through the real-world instruments all over the world."

South Korea said it plans to consistently address the issues, including the limited trading hours of the Korean currency, but it said the process could take time.

"Although we do not believe that limited trading is a critical issue, we plan to sufficiently review requests from the MSCI," said a South Korean official handling the issue who asked not to be identified, citing policy. 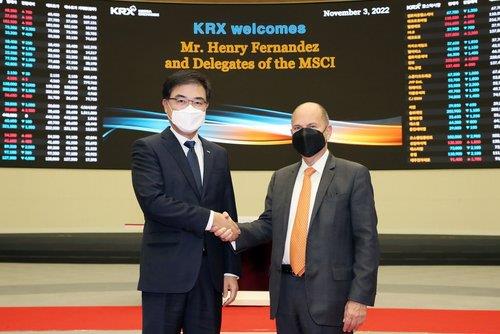