SEOUL, Nov. 8 (Yonhap) -- "Decibel" is a blockbuster action flick meant to get your adrenaline pumping with a story of a retired Navy lieutenant colonel's struggle to stop a terrorist's plot to attack people with noise-sensitive bombs.

Director Hwang In-ho adopts the familiar genre formula in the film as it features a strong, courageous father (Kim Rae-won), who relentlessly chases the villain to save his family.

Unlike other action films tagged with explosives, it uses time bombs that tick faster when noise levels surpass 100 decibels to ratchet up tension in places like football stadiums, water parks and playgrounds.

Big explosions, improbable scenarios and smooth-talking characters are fun to watch, but the film manages to reveal the human drama of a former Navy lieutenant colonel who lost his comrades in a submarine sinking. Set in the southern port city of Busan, the former Navy lieutenant colonel gets a call from a mysterious person (Lee Jong-suk), who reveals his plot to explode bombs in various settings.

The veteran is one of the rescued survivors from an ill-fated submarine, which sank after being attacked by a torpedo during a mission a year ago.

The terrorist knows his past and seems to be fueled by some sort of revenge that powers the narrative from start to bloody finish. 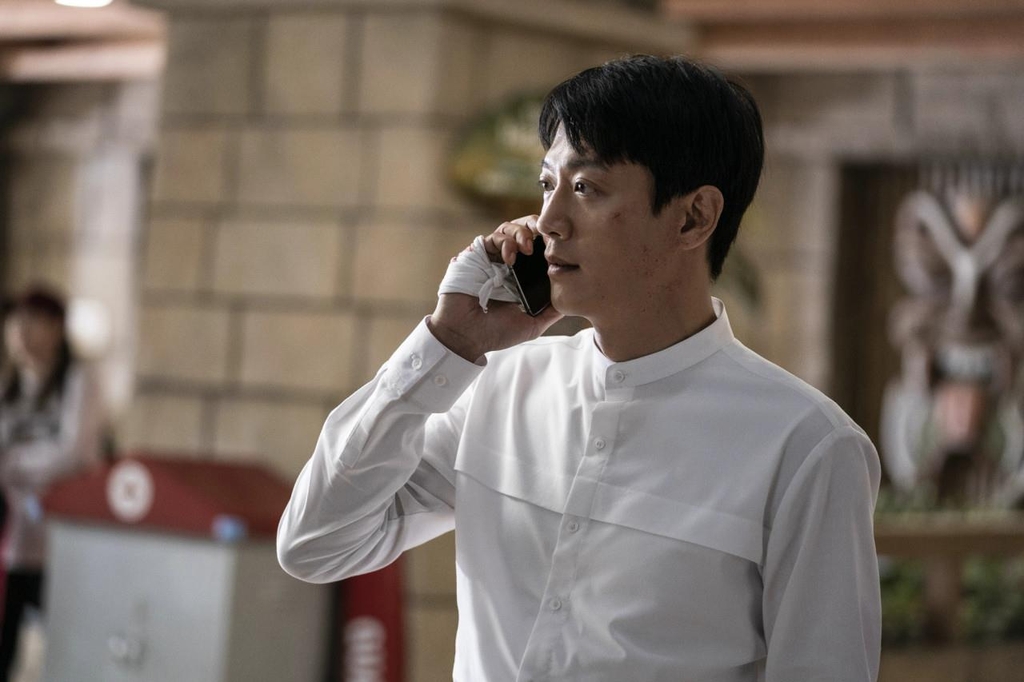 Why did the terrorist design the special bombs that respond to sound? Why does he force the Navy veteran to make hard choices in life-or-death situations, like picking between his family and the crowd, or between his wife and his daughter?

The story later reveals the terrorist's motives in flashbacks in the sinking submarine, a key word for the design behind the noise-sensitive bombs.

Although the movie's central structure is about a father's desperate search for his family, the characters are mostly detached from each other and the story does not evoke a strong emotional response.

It rather focuses on comradeship in the sinking warship and questions what's left after a person's loss and tragedy.

The story delivers the terrorist's motivation and hidden intentions behind his vicious plot to show his human side but fails to convince the audience how he was able to hide so many bombs in various settings without getting noticed.

Kim Rae-won shines in the high-octane movie as the highly skilled veteran without stunt doubles. The 41-year-old actor, wearing an all-white uniform, takes the wheel in car racing scenes, jumps from a building, dives into the water and takes fight scenes into his hands.