SEOUL, Nov. 14 (Yonhap) -- Jin, a member of the K-pop superband BTS, is expected to serve in a military unit near South Korea's border with North Korea, the singer has said, with his enlistment expected within next month.

The 29-year-old unveiled the information Sunday when a fan on Weverse, a K-pop fan community platform, asked whether he is excited about his upcoming birthday.

He appears to have received notification to report for duty, which requires him to go to a boot camp in a front-line area within next month, considering that his birthday is on Dec. 4. 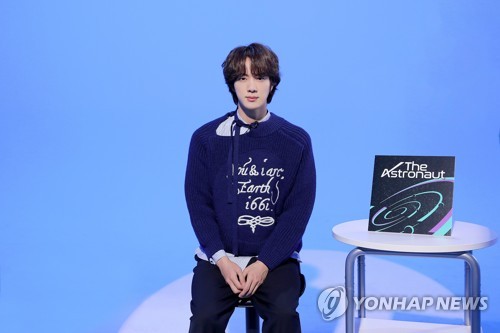 The band's agency, Big Hit Music, did not disclose the exact date or place of his enlistment, however.

The vocalist announced his plan to serve in the military after the band's one-day concert in the southern port city of Busan last month. After returning from Buenos Aires, where he gave his first live performance of his solo debut single "The Astronaut" during a concert of British rock band Coldplay, he filed a request with the military to revoke his delay of conscription.

The singer had his conscription delayed till the end of this year under the Military Service Act revised in 2020. In South Korea, all able-bodied men are required to serve in the military for about two years.