In a statement posted on its website, the IFJ said South Korea "has a proud history of democracy and press freedom that must be defended," and that Yoon's targeting of MBC "sets a dangerous precedent."

"The Korean media has rightly defended its media freedom, and the IFJ commends ongoing solidarity efforts from journalists and media workers to call out government acts of intimidation and censorship through attempts to block media access," it added.

Last week, the presidential office informed MBC of the decision, citing what it called the broadcaster's repeated "distorted" coverage. The notice came just two days before Yoon left for Cambodia and Indonesia for his two-nation tour which includes his attendance at various summits involving the Association of Southeast Asian Nations and the Group of 20.

The presidential office did not specify which reports were distorted, but the TV network was caught up in controversy after it first released hot mic footage of Yoon during his trip to New York in September, which the ruling bloc accused as being unfair reporting against Yoon. 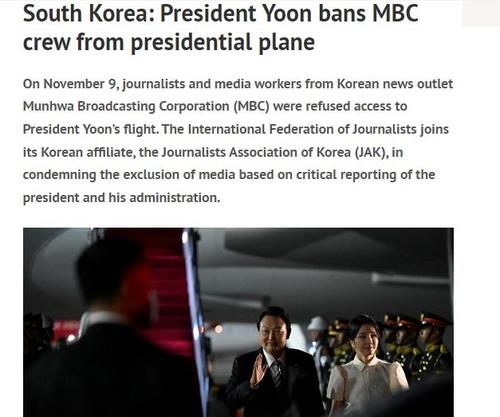