BALI, Indonesia, Nov. 15 (Yonhap) -- President Yoon Suk-yeol used his first trip to Southeast Asia as president to send a strong message that South Korea intends to build a "free, peaceful and prosperous" Indo-Pacific region, but not to the exclusion of China.

In Phnom Penh, the first leg of his two-nation trip to Cambodia and Indonesia, Yoon unveiled South Korea's new Indo-Pacific strategy with a focus on creating a free, peaceful and prosperous region governed by a rules-based international order.

The strategy led to speculation South Korea was aligning itself closer with the United States in countering China's aggressive actions in the South China Sea and beyond, though the presidential office insisted the intention was not to exclude anyone.

Yoon also presented an adjoining vision specific to the Association of Southeast Asian Nations (ASEAN), called the Korea-ASEAN Solidarity Initiative, which outlined Seoul's plans to diversify its economic cooperation with the bloc from one focused on Vietnam to one that covers all 10 ASEAN members. 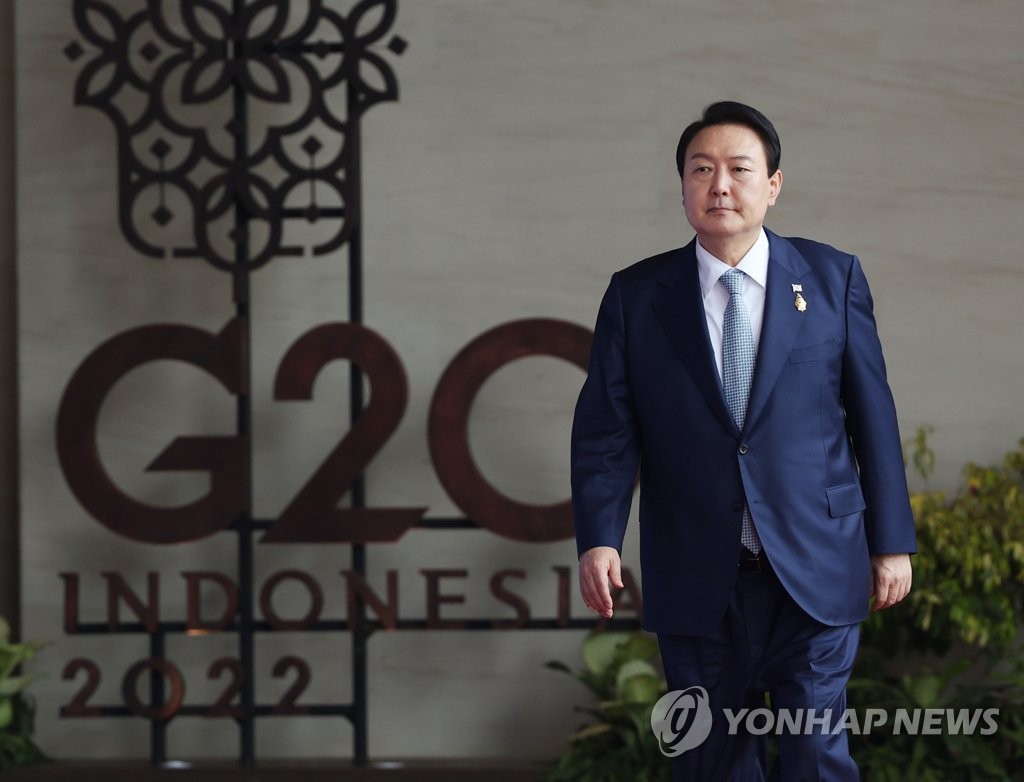 Unveiling the Indo-Pacific strategy in Cambodia was symbolic at a time when Southeast Asia has emerged as a key battleground in the U.S.-China rivalry.

But Yoon dispelled any suspicion that Seoul was distancing itself from Beijing when the presidential office announced Tuesday, with hours to go, that a summit between Yoon and Chinese President Xi Jinping was fixed for the afternoon in what would be their first summit and the first summit between the leaders of the two countries since December 2019.

Yoon and Xi held talks in Bali on the sidelines of a Group of 20 summit.

Yoon asked Xi to play a more active and constructive role in dealing with North Korea's nuclear program, a request that came as North Korea has sharply escalated tensions with a barrage of missile tests and simulations of a nuclear strike on South Korea, and amid concern it could conduct what would be its seventh nuclear test soon.

Xi responded that South Korea and China have a common interest in Korean Peninsula issues and need to defend peace, and that he hopes South Korea will actively improve inter-Korean relations.

He also expressed his support for Yoon's "audacious plan" that offers massive economic assistance to the North in exchange for a denuclearization commitment.

North Korea was high on the agenda throughout Yoon's six-day trip.

In Cambodia, Yoon attended a South Korea-ASEAN summit, an ASEAN Plus Three summit, and an East Asia Summit, and called on the international community to respond firmly in the event North Korea conducts its seventh nuclear test while reaffirming that the door remains open to dialogue with the North.

In his bilateral meeting with U.S. President Joe Biden, the two leaders vowed to respond with "overwhelming force using all available means" in the event North Korea uses nuclear weapons.

With Japanese Prime Minister Fumio Kishida, they condemned North Korea's recent missile launches and agreed to continue discussions for a quick resolution of "pending issues" between the two countries, a reference to their dispute over Japanese firms' compensation of Korean victims of wartime forced labor.

At a trilateral summit involving Yoon, Biden and Kishida, the leaders adopted a joint statement reaffirming the U.S. commitment to providing extended deterrence to South Korea and Japan, and stating their agreement to share data in real time on incoming missiles from North Korea.

The presidential office said it was the first time the three countries adopted such a comprehensive joint statement that included an agreement to establish a new trilateral economic security dialogue and to jointly respond to "economic coercion." 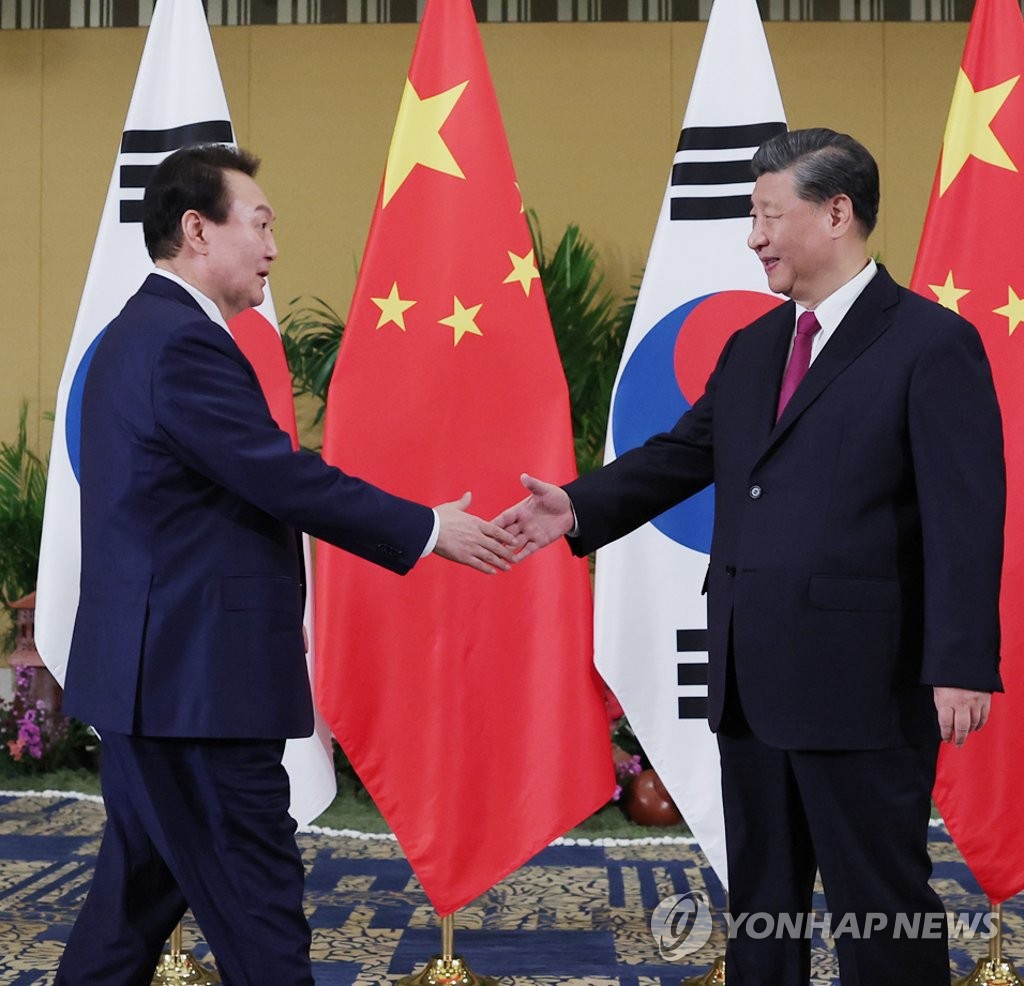 Two days before his departure, the presidential office decided to ban local TV station MBC's reporters from boarding Air Force One to cover the trip over what it said was the broadcaster's repeated "distorted" reporting, an apparent reference to its airing of Yoon's use of vulgar language caught on a hot mic.

MBC accused the presidential office of restricting the press and sent its reporters on the trip on commercial flights.

First lady Kim Keon-hee also created a stir after she posed with a sick Cambodian child at his home in Phnom Penh. Opposition politicians slammed the first lady for attempting to look charitable and emulating late actress Audrey Hepburn. 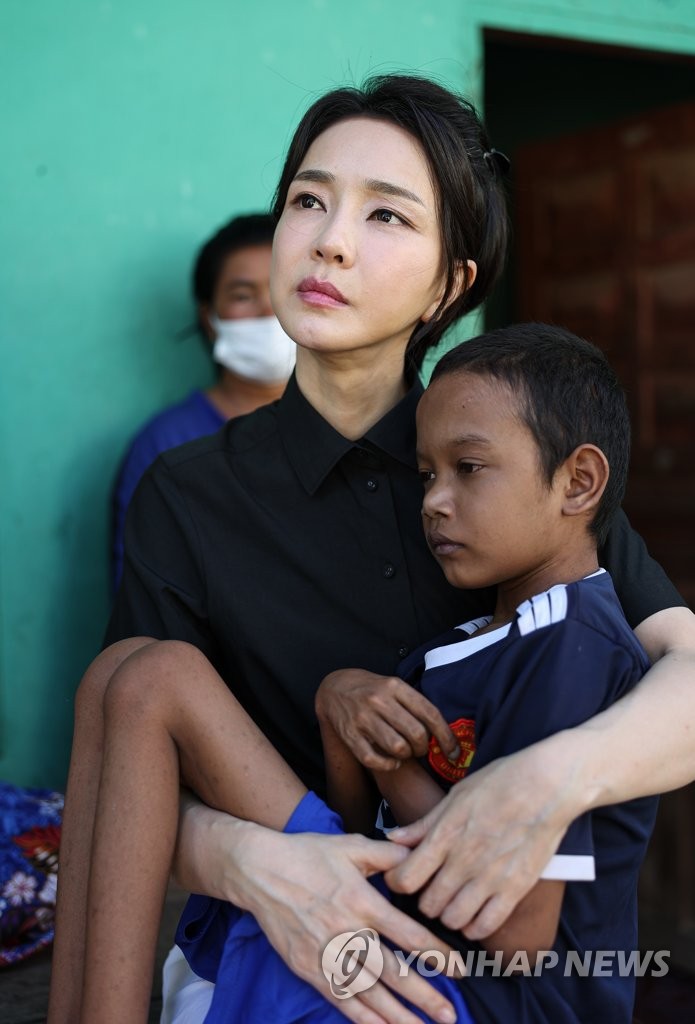