SEOUL, Nov. 17 (Yonhap) -- Jin, a member of the K-pop megastar BTS, will put out his individual book of photography next month before joining the military, the group's management agency said Thursday.

The photo book, titled "Sea of JIN Island," will come out Dec. 2 as part of the group's "Special 8 Photo-Folio" project launched in September to show off the group members' individual characters and new sides. Three other members -- Jungkook, RM and Jimin -- have published their individual photo books under the project.

"Jin expressed various emotions that can be felt on the sea in this book using three concepts: captain, pirate and fisherman," Big Hit Music said in a press release.

Last month, the 29-year-old singer announced his decision to serve in the military, practically ending a controversy over whether BTS should be granted an exemption from active military duty for its extraordinary contribution to the field of art. He later revoked his delay of conscription, which made his enlistment possible as early as next month. 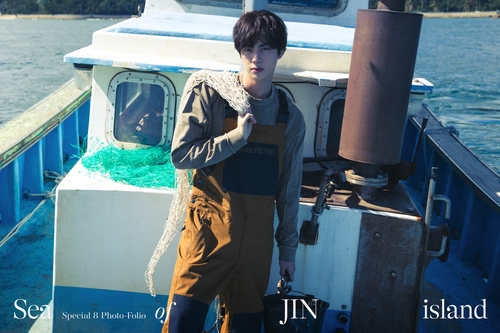