SEOUL, Nov. 21 (Yonhap) -- South Korea's military has identified the remains of another South Korean soldier killed during the 1950-53 Korean War after their discovery earlier this year, the defense ministry said Monday.

The ministry's excavation team and service members from the 5th Infantry Division found Ssg. Pyeon Gwi-man's remains from White Horse Ridge, a former battle site inside the Demilitarized Zone separating the two Koreas, in July. They also discovered 91 pieces of his personal belongings, including a fountain pen with his name engraved, at the site.

They were able to narrow down the remains' identity thanks to the pen and were able to identify them based on DNA samples that his family had registered with the government over four times since 2006.

Born in the southwestern city of Naju, Pyeon joined the military in June 1952 at the age of 27 and served as part of the Army's 9th Infantry Division.

He was killed during the fierce 10-day battle of White Horse Ridge that began on Oct. 6, 1952, and ended in victory for the South Korean side.

The government plans to hold a ceremony marking the return of Pyeon's remains at a veterans hall in Osan, 43 kilometers south of Seoul, on Tuesday.

South Korea has so far identified the remains of 200 service members killed in the conflict since it launched the excavation project in 2000. 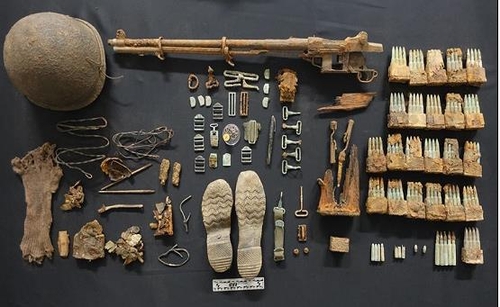