SEOUL, Nov. 22 (Yonhap) -- The Korean Confederation of Trade Unions (KCTU), one of South Korea's two umbrella labor unions, declared Tuesday it will carry out an all-out fight for increased labor rights as a series of large-scale general strikes is set to kick off starting this week.

Unionized workers of Seoul Metro and Korea Railroad Corp. are also scheduled to go on strike the following week.

"We declare an all-hands strike and all-out fight to expand labor rights, block privatization attempts and reinforce public services," a KCTU official said in a press conference in front of the National Assembly, vowing to mobilize all of its 1.1 million union members.

The militant umbrella union has been pressing the government and the National Assembly to enact an additional law to prevent fatal accidents at construction sites and extend a freight rate system guaranteeing basic wages for truckers.

Other demands include the suspension of the government push to privatize transportation, medical and other public services, as well as the revision of the labor law to limit employers' damage claims against labor unions.

"The Serious Accidents Punishment Act went into force early this year, but the frequency of serious accidents at workplaces has increased even more than that of last year," the KCTU official said.

Nearly half of fatal industrial accidents involve construction sites, the official said, demanding the enactment of a special construction safety law to root out such workplace deaths.

KCTU Chairman Yang Kyung-soo said the sit-in is aimed at "stopping the free rein of the Yoon Suk-yeol government and pressing the National Assembly to fulfill its role," pledging efforts to win public support for the labor action.

Labor Minister Lee Jeong-sik has warned that the government, along with the police, will "sternly" deal with any illegal acts by labor unions or employers. 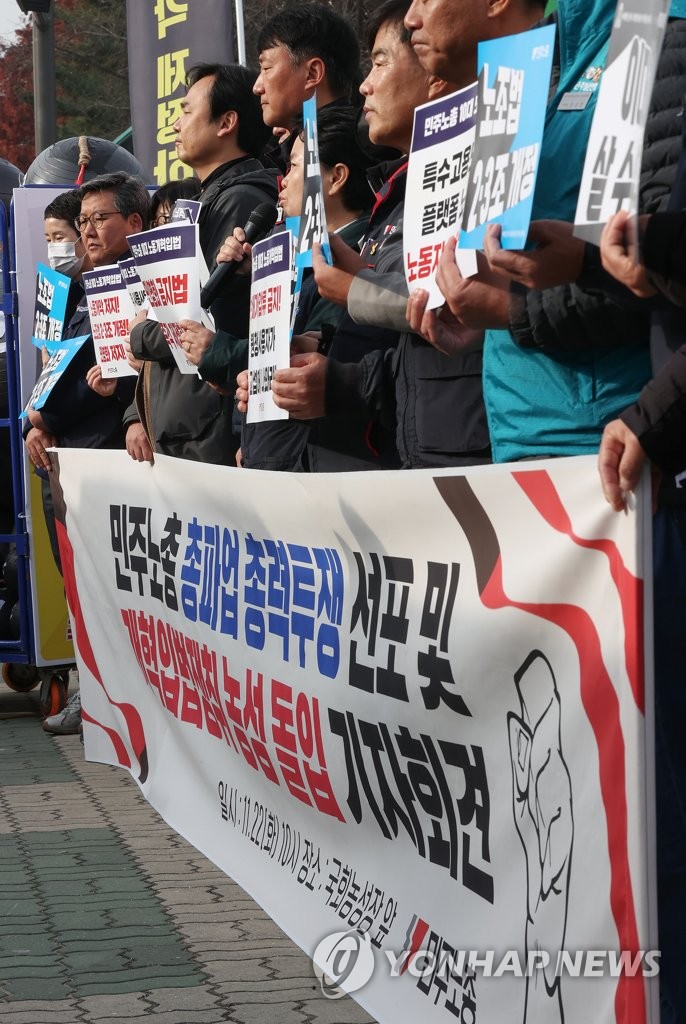