The talks took place in Siem Reap on Tuesday on the sidelines of the three-day Association of Southeast Asian Nations (ASEAN) Defense Ministers' Meeting-Plus (ADMM-Plus), which ends Thursday.

During his talks with his Indonesian counterpart Prabowo Subianto, Lee took note of ongoing arms industry cooperation between the two countries, including a project to develop an advanced fighter jet, called the KF-21.

Indonesia is a partner country that has agreed to shoulder about 20 percent of the total KF-21 development cost amounting to 8.8 trillion won (US$6.5 billion).

Prabowo stressed Jakarta's commitment to the KF-21 project as affirmed by their leaders during their summit in July, according to the ministry.

Lee also requested Indonesia's cooperation in the efforts to regularize a defense ministerial meeting between South Korea and ASEAN, as Jakarta will assume next year's rotating chairmanship of the regional bloc. 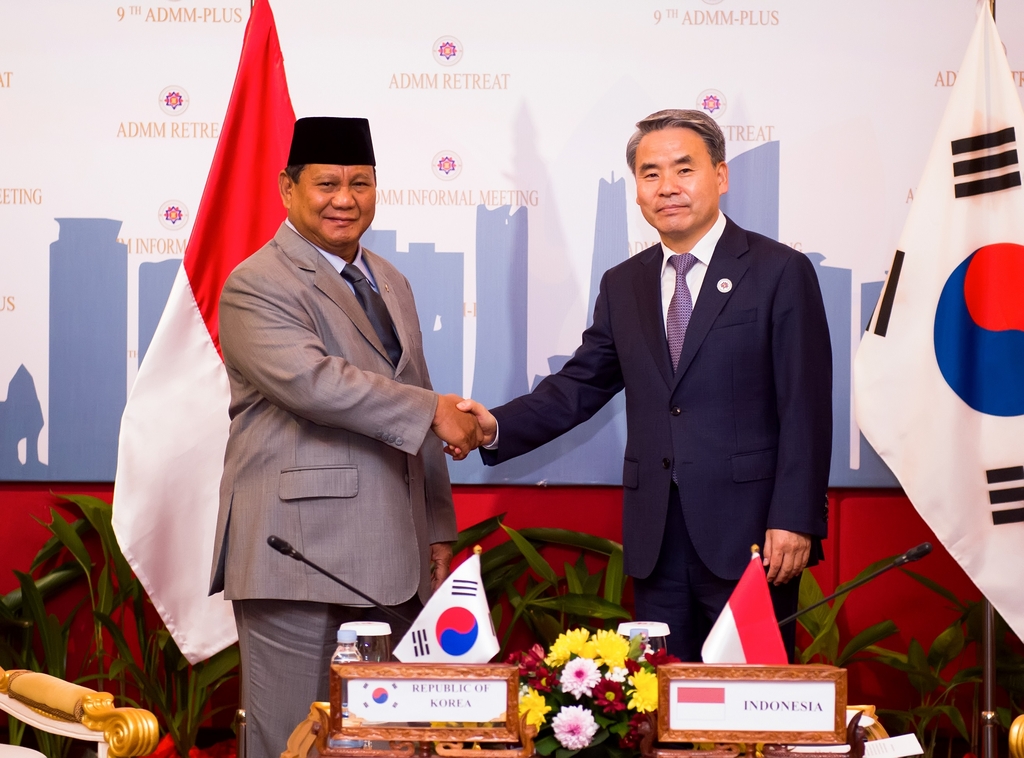 In his meeting with Philippine Defense Minister Jose C. Faustino Jr., Lee expressed hopes to broaden defense cooperation in combined drills and other areas, citing the summit between their leaders earlier this month, where they agreed on the need to strengthen strategic cooperation.

Faustino voiced hopes for cooperation with Seoul in its push to strengthen maritime security, according to the ministry.

Lee also discussed ways to boost defense cooperation with his Vietnamese counterpart Phan Van Giang, who proposed Lee visit Vietnam on the occasion of the 30th anniversary of the establishment of bilateral ties this year. In turn, Lee said he would positively consider a visit to Vietnam sometime next year.

The Vietnamese minister also said that South Korea's handover of decommissioned warships to his country has greatly contributed to its maritime security and requested cooperation in ensuring the transfer of an additional corvette can proceed smoothly, the ministry said.