SEOUL, Nov. 23 (Yonhap) -- Nongshim Co., a major South Korean producer of snacks and instant noodles, said Wednesday it has won a bid to export a smart farm system to Oman, marking the first sale since it formed a dedicated in-house startup for the business in 2018.

The Omani government has decided to buy two units of smart farm containers worth US$200,000 made by Nongshim, it said. The 40-foot-long boxes will provide a total of 165-square-meters in cultivation area.

The boxes have built-in systems that automatically adjust the environment, such as temperature, humidity, oxygen levels and the amount of light. Most of the infrastructure and software built in the containers were developed by Nongshim, the company said.

Plants can grow at half the cultivation period needed in normal farming, it added.

"There is a growing demand for factory-style smart farms in the Middle East, especially due to the harsh environment there. We plan to export more of our smart farm technology to the region," a Nongshim official said. 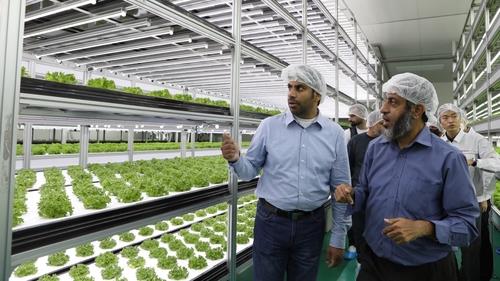