SEOUL, Nov. 23 (Yonhap) -- A total of nine police officers and government officials were additionally booked Wednesday for an investigation into the bungled response to the crowd crush in Seoul's Itaewon neighborhood, police said.

Among those on the list are Park Sung-min, a superintendent general, and Song Byung-joo, a former emergency monitoring officer at Yongsan Police Station, as well as four other intelligence officers, they said.

Park is under suspicion of ordering the deletion of an internal intelligence report giving prior warnings of a possible safety accident during the Halloween period in a suspected attempt to cover up inaction. A superintendent general is the fourth-highest rank in the police.

Also on Wednesday, Song, who was in charge of the police's 112 emergency hotline in Yongsan Ward covering the Itaewon district, was quizzed by a special investigation team earlier in the day on whether he had promptly reported the situation to Lee Im-jae, who formerly headed the station.

Lee earlier testified during a parliamentary audit that he learned of the accident at around 11 p.m., around 45 minutes after the incident first erupted, claiming the emergency hotline chief had earlier reported to him that nothing unusual was going on.

Lee has been booked on charges of professional negligence and manslaughter by negligence resulting in the deaths of at least 158 people, mostly those in their 20s, on Oct. 29.

Yoo presided over a safety meeting on behalf of Yongsan Ward office chief Park Hee-young two days before the incident to discuss measures against possible safety accidents during the Halloween period.

Park has also been booked on charges of professional negligence resulting in the deaths. 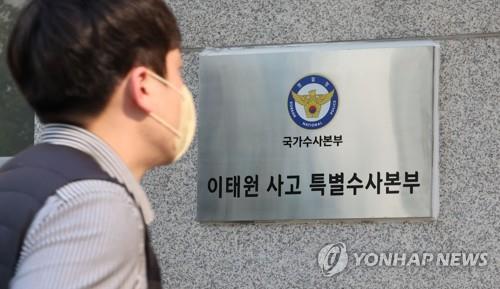