SEOUL, Nov. 23 (Yonhap) -- South Korea's industry ministry said Wednesday it will seek to enhance cooperation with partner nations in infrastructure, defense and other strategic fields with tailor-made approaches and to diversify its export structure in an effort to prop up sluggish exports.

A set of supportive measures were discussed during an inaugural meeting of export strategies presided over by President Yoon Suk-yeol, as the country has been struggling with dwindling global demand amid aggressive monetary tightening by major economies and an economic slowdown, as well as high energy prices.

Last month, South Korea's exports logged an on-year decline for the first time in two years. It also suffered a trade deficit for the seventh consecutive month on soaring imports. 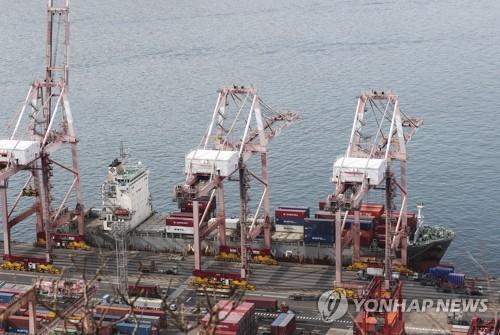 Under the plan, the government vowed to enhance support for exporters making inroads into Middle East nations to actively participate in their major energy, infrastructure, nuclear power generation and other manufacturing sector promotion projects.

The government decided to launch a joint commission with business entities for deeper ties with Saudi Arabia, as the two sides agreed to work more closely on its Neom city and other projects by signing 26 memorandums of understanding during Saudi Crown Prince Mohammed bin Salman's visit to Seoul last week.

In an effort to boost exports to China and reduce the trade deficit, South Korea will expand support for corporate research and development programs from this year's 801 billion won (US$592.6 million) to 937.6 billion won next year and to devise measures to revise the trade structure.

It will also push to boost sales of consumer goods, such as fashion and clothing, medicine and other living goods, in line with their growing demand in the Chinese market, according to the ministry.

In terms of exports to the Association of Southeast Asian Nations, South Korea will boost exchanges and investment in financing, smart cities and other broader fields, while diversifying its presence in the region. Currently, the country's exports center on the Vietnamese market and consumer items.

To promote exports to the U.S. market, the government stressed an active response to Washington's restrictions under the Inflation Reduction Act and the exports control of semiconductors to China, while actively taking part in eco-friendly projects.

With European Union partners, South Korea aims to boost sales of military items and nuclear power generation. It also vowed active consultations with the EU regarding its carbon market regulations.

In an effort to find new markets, the government is eyeing South American nations by pushing to sign a free trade agreement with the Mercosur bloc and deepen ties with Chile, Brazil and other resource-rich nations, the ministry said.

Earlier this year, the government plans to provide up to a record 351 trillion won in trade financing to exporters amid a widening trade deficit.

"In order to increase exports, we cannot tell private enterprises to do it on their own. ... For this, we need the government's enthusiastic and preemptive assistance," Yoon said, adding that he will personally preside over future export strategy meetings and check each strategy and issue regarding exports.