In the eight-episode series, the three -- Yoo Jae-suk, Lee Kwang-soo and Kim Yeon-koung -- get a hands-on experience in eight different fields ranging from making traditional Korean roof tiles and fermented Korean sauces to catching long-legged octopus on a mud flat and to weaving fine ramie.

"Viewers probably have heard of those items at least once, if they are Korean," the show's co-director Kim In-sik said during an online press conference for the show Wednesday. "But because we have not experienced or tried them in person, there are tremendously interesting and mystic sides to them, which we thought we knew well but actually not. Those are what we intended to show in this series."

He hoped overseas viewers can also get to know more about Korea through the show. 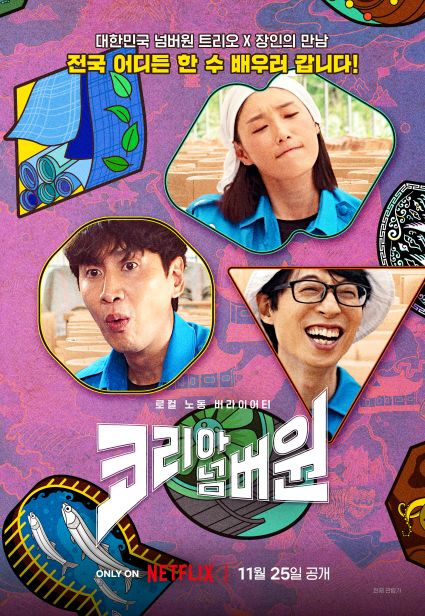 Its other co-director, Jung Hyo-min, said he thought the three celebrities are the best combination for the cast of a show with such a concept.

"They were exactly what I wanted for the show. I figured it would be great if I could cast them and was really happy when my wish came true."

When asked why he keeps making labor-themed entertainment shows, Jung said he didn't intend to do so but was naturally drawn to the subject because he thought happiness, sadness and pain from work are elements people can easily relate to.

Yoo, the famous comedian who hosted a number of hit variety TV shows, including "Infinite Challenge," "Running Man" and "Hangout With Yoo," said he decided to be in the upcoming Netflix show as he agreed on its purpose to enhance the world's awareness of traditional Korean culture.

For him, weaving fine ramie, or "mosi," fabric in the southwestern region of Hansan was the most memorable of all the eight hands-on experiences he had for the new show.

"I've learned in various ways about Hansan fine ramie in school but didn't know the fabric is made that way," he said.

Lee agreed it was the most challenging experience mentally and physically, but said he was more interested in making lacquerware inlaid with mother-of-pearl.

"The lacquerware is a familiar thing that I used to see whenever I visited my grandmother's house when I was young. I learned how it can be so diverse and beautiful this time." 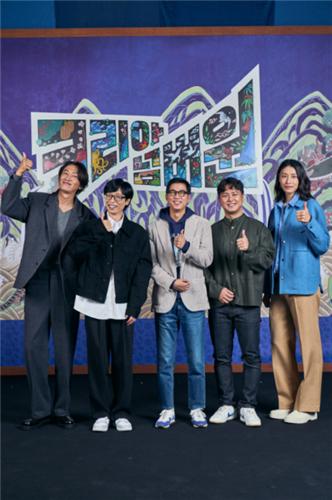 Professional volleyball player Kim Yeon-kyoung has made guest appearances on several hit variety shows but has never been a regular member.

"I thought a lot about if it would be okay for me to do this show as an active professional athlete," she said. "But I decided to be in it, because I thought the program's intention is very good and it would be fun to work together with Yoo and Lee."

She often chatted a lot with them over a cup of ramen noodles before filming began and got to know them more.

"I felt as if I was traveling with them rather than working, so it was great to do this work," she said, laughing.

"Korea No. 1" is set to be released on Netflix on Friday.